Scaring up a few Halloween horrors with Stephen King

This past Monday,Turner Classic Movies aired a new documentary about the horror genre which had Stephen King at the helm.

The "A Night at the Movies" series on TCM tends to focus on one particular genre at a time and getting a guy like King to do this is quite the cinematic coup. He brings more to the table that the usual writer's observations,due to having appeared in several films himself(with a decent sense of humor about his acting skills). King is also one of the few writers who is great to listen to as well,quite the bonus there: He spoke about the movies that influenced him as a kid,such as the original 1956 version of Invasion of the Body Snatchers,Tod Browning's cult shocker Freaks and Val Lewton's Cat People.

King also fondly recalls the Saturday afternoon matinee showing he went to as a boy to see Earth Vs. The Flying Saucers,which had an unexpected scare attached to it. During a rather climatic scene,the movie was stopped and the manager addressed the audience,telling them that the Russians had launched the first space shuttle.

That touch of reality played off of the sci-fi fears running amuck on screens and made a strong impression on King,along with the Ray Harryhausen special effects: 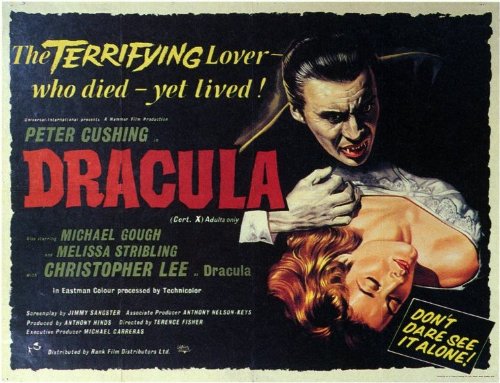 King also discussed his preferences for movie monsters and admitted he's not much of a werewolf fan but does appreciates a good zombie fest.

His attitude about vampires is mixed,joking at one point that Twilight is basically "I Was a Teenage Vampire" and not finding Bela Lugosi particularly frightening. However,he does like the more gruesome creature depictions of vamps,a la Nosferatu and his idea of a terrifying Dracula is one in the Christopher Lee mold: King's take on the power of horror is great to hear,even for those who prefer to cover their eyes during the really scary parts of the movie. He also makes excellent suggestions about little known fear flicks to look out for,like the George C. Scott ghost story The Changeling from 1980. I saw that one once and it's a true blue chiller there,folks:

TCM will be replaying the Stephen King special throughout the month of October and every Monday this month will be devoted to many of the horror classics mentioned on the program. It's a great excuse to catch up on cult chillers like The Cabinet of Dr. Caligari,I Walked with a Zombie and The Haunting or discover some new favorites.

I for one would like to see if The Tingler is as stimulating without any William Castle wiring in my chair: