Top Chef TX needs sizzle for their steaks,Work of Art does the street hustle and TAR's Final Three

The Quickfire on Top Chef Texas this week had the chefs drawing knives to see which mother sauce they'd be working with(a mother sauce is a basic sauce,with the five best known being tomato,bechamel,veloute,espagnole and Hollandaise).

Each of them had to add their own unique twist to the sauce and serve it with an appropriate dish. Grayson won immunity for her seared corn flavoring to her Hollandaise sauce over scallops and a corn ravioli.

The Elimination challenge required everyone to work as a team in order to make a four course steak dinner for the Cattle Baron's Ball at South Fork Ranch(yes,the South Fork,as in the 1980's hit show Dallas).

Two of the courses had to feature steak and a new car was thrown in as the big prize here. The chefs broke off into mini teams that focused on one course to prepare while all of them pitched in to set things up during service.

Heather and Lindsey wound up being the take charge gals here,since no one really wanted to be seen as the leader and risk getting eliminated. Heather also got on Beverly's case for taking too long to get the shrimp ready for the soup in the first course(which turned out fine). She's not the only one who has issues with Beverly but Heather is the one being most vocal about it.

Meanwhile,Heather's peach cake with candied pecan streusel won top honors and the car,which annoyed Edward since he had given her that recipe for an earlier challenge. Lots of tension building up here,folks!

Edward had other things to worry about,as the heirloom tomato salad he made for the second course went over like a lead balloon.

It was deemed bland and boring,not to mention safe. He wound up in the Bottom Three for it but he was the only one from his section of the dinner to do so.

The real problems were in the third course,as the steaks were supposed to be medium rare. Ty-Lor was in charge of the meat and he grilled them all outside,sending them to the kitchen to be finished in the oven.

Due to Lindsey rushing the proceedings,the steaks were cooked too early and the results were uneven at best. Ty-Lor was already wiped out before the dinner,due to spending the night at the local ER to get his hand stitched and he didn't realize that the steaks were ruined in time.

To his credit,Ty-Lor took all of the responsibility for that failure and even when put on the chopping block,he didn't throw anyone under the bus. I'm glad that he stayed,that showed true character on his part.

Whitney went home instead,for her potato gratin that was undercooked and lacking seasoning. She probably should have baked it ahead of time but for some reason,she was convinced that it would be better to wait. Next week,the chefs take a ride with tequila and Heather gets into it with Beverly again. Ladies,can't we all get along?

On Work of Art,the challenge was to make art suitable for selling on the street(Tribeca Park,to be exact)and then have a corresponding display in the gallery. They had only five hours to buy materials and get everything ready to sell.

Everyone worked in teams of two and the one that made the most money would receive immunity along with 30 grand. They're certainly giving away quite a bit of cash this season,which in some ways kind of negates the whole "selling out" concept here.

Young paired up with Sara J. and he made small paintings to sell,plus T shirts and hand painted boy's underwear. For the gallery showing,one of his unsold paintings was displayed along side a triptych of the colorful designs for the underwear.

For some reason,that seemed to anger the judges,especially Judge Jerry and guest judge Jeanine(who was a regular WOA panel member last year). They insisted that there was a disconnect between what he had sold on the street and what he brought to the show.

In my opinion,his pieces were a nice contrast in whimsical and weird. Plus,if he had put out underpants,Young would've been slammed for that as well.

Sara J. had some T shirts and small paintings,too but sold out of them quickly. She then resorted to the classic "portrait on the street" routine,using watercolors to enhance her drawings.

Her strengths in drawing really shined here and Sara's fast on her feet approach earned enough money for her and Young to win the challenge. I really admire her skills as the show has gone along and look forward to seeing more of her talents. 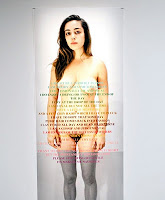 Speaking of exposing your talents,Lola went for the obvious and did a nude photo of herself with text written across it that was supposed to be her "secrets". She even scribbled some "secrets" on the various sized pictures that were sold in the park.

*Sigh* Maybe it's just me but isn't that whole sharing secrets gimmick over and done with by now? Not to mention that writing on pictures and drawings(tracings,actually) suggests more of a frustrated poet than a visual artist. Honey,go write a Fiona Apple song or something like that,seriously.

Sarah C,meanwhile,was her partner and she stenciled T shirts with feather breast designs. She also made feathered headdresses,like the kind you make in kindergarten,and her piece for the show was a man/woman silhouette that looked as empty as Lola's imagination.

I know,picking on Lola is not fair but this is the second time that she's teamed up with someone and that person wound up getting all giggly and drawing cartoon penises.

Lola said she was a witch in the last challenge and her jinxing abilities are starting to show. Anyway,Sarah went home and what will happen next should be mind boggling,at the very least.

The Final Four teams on The Amazing Race went to Panama and it looked as if surfers Tommy and Andy were going to be the team to beat as the last leg of this round was ending. However,the guys took a wrong turn as they had trouble with the clue that would lead them to the Pit Stop.

It was difficult,as the teams were sent to watch a group of dancers and either spot the name of the place in the design on one of their dresses or notice the building drawn on the medallions the ladies were wearing. Tommy and Andy saw the word "Balboa" and took that as the clue,which headed them off in the wrong direction.

They came in last and so the Final Three teams are Ernie and Cindy,Amani and Marcus and Jeremy and Sandy. Good luck to you all and sorry to see Tommy and Andy leave so soon. They did run a good race here and best of luck to them in the future:

GAME OF THRONES: Season Two is set to begin in April of 2012 and the DVDs for Season One will be available in March. Perhaps those discs will offer some hints of what is to come,particularly for such fan favorites as Danys,Tyrion and the spunkiest Stark of them all,Arya: