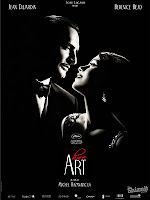 Oscar fever is well underway,with one slight hitch. The Golden Raspberry awards(aka The Razzies)have decided to move back their nominations and their awards ceremony,which usually tagged along side the rest of the regular film award crowd.

They'll announce their nominees on February 25 and give out the prizes on April 1. While it is fitting that the Razzies be handed out on April Fool's Day,the risk of being late with the punchline is one that is taken with this move.

Then again,movie parodies can be fun just about any time if done right. Let's look over a few mock versions of this year's Oscar contenders and see if any of them are potential Razzie contenders:

A major player for this Oscar season is Moneyball,the insider baseball flick with six nominations under it's belt. Movie critics and sports fans alike adore this based on a true story depiction of how the manager of the Oakland As teamed up with a statistical analyst to recruit less expensive but more reliable athletes that would lead them to victory.

The folks at SNL,however,decided to go down a rather realistic path in showcasing their version of the film. To be fair,this mock Moneyball is somewhat backed up by several memoirs and a few Congressional hearings:

Meryl Streep's performance as Margaret Thatcher in The Iron Lady has gotten more than it's standard share of Oscar buzz,causing people to wonder if she'll be the one to take the gold home this time out.

However,would those same folks be cheering if another iconic diva of stage and screen were the headlining heroine of this film? A very intriguing notion to consider,hey,moi?:

Another front runner in this race, War Horse is a real throwback to the golden hued yesteryear of Hollywood,right down to the old school look and sound of it.

Part of this movie's appeal is in the promotional package it comes in and getting every detail perfectly in tune with the tone of the piece was vital. Especially when it came to the narrator of the trailer,who needed to enunciate each word correctly:

Serious cinema lovers waited quite a while for directer Terrace Malick's latest epic,The Tree of Life,which helped to make it an arthouse darling. The movie did rack up a good number of film festival prizes as well as accolades but it didn't resonate with regular movie-goers in the same way.

The quality of all involved in this film is not in doubt but as the trailer indicates,many saw this story as a confusing mix of metaphysical musings and a Midwestern family drama that doesn't settle as well as popcorn butter topping does during the course of an afternoon matinee:

Before Oscar night,we'll have many more parodies to choose from,I am sure.Having a sense of humor about something you love keeps you on balance and makes you appreciate that format much more,in my opinion.

Meanwhile,if Billy Crystal is feeling overwhelmed by the large number of nominated films to sing about,he might want to sign this little guy up(as a warm-up act,at the very least):