A Quickfire challenge was not given on this week's Top Chef Texas as it was time for Restaurant Wars to begin. To make things a little more interesting,the teams were divided into guys vs. gals and each group took over the same space for one night only.

The requirements for RW were that each eatery offer a three course meal(with two choices per course)and have enough servings for a hundred people. One team member had to be the front of the house and everyone had to be responsible for at least one dish.

In addition,each team would dine at the other one's restaurant,along with the judges. Both Emeril and Hugh Acheson were on deck for this along with Judge Tom and Padma. While both teams had trouble with service and in the kitchen,the decision on which one was best came down to the food.

The ladies named their restaurant "Half Bushel" but their food was full price in terms of quality. Sarah made a great first impression with her appetizer plate of a mozzarella filled ball called an arancino that had a celery salad with eggplant on the side.

Emeril adored this dish,pleased beyond belief that it was steaming hot when it arrived at the table. The cheese was perfectly melted,which made it sing on the palate.

Grayson also served a top notch appetizer that went over well. Her peach salad with
pickled shallots and a bacon vinaigrette sounded a little strange and deceptively simple at the same time.

However,that flavor combo turned out to taste like the porridge that Goldilocks chose;just right. Both the judges and the diners loved it to pieces.

Although the ladies' team won Restaurant Wars,only one person could be named the all over winner and that honor went to Beverly.

Granted,she's done ribs before in this competition but when you know how to do something to perfection,it's hard to stop.Beverly received a bottle of wine and a trip to that brand's vineyard,which I'm sure irked both Sarah and Lindsay that much more.

Both of them took turns picking on Beverly in the kitchen,with Lindsay being extra mad due to the fact that Bev was cooking the halibut for her entree(Lindsay had front of the house duties)and complaints about the fish being dry came from all sides.

Grayson tried to defend Bev,saying that it was Lindsay's technique that was the problem. I'm not a fish cook so I can't tell who was right on this debate. However, that win speaks volumes about Beverly's skills despite all the bitching being sent her way,in my opinion.

Meanwhile,the guys wound up on the Bottom for their "Canteen" concept that didn't pan out. Even their desserts had difficulties.

Edward's Almond Joy cake was delicious except for the fact that you couldn't taste any coconut in it. Dude,when you model your end of the meal treat after a well known candy bar,you have to make sure that all of the flavor components are there. Ed did have coconut powder in one of the sweet purees on the side but it needed to be present in every bite.

The other dessert was a homemade Cracker Jack mixed with cherries and peanut butter ice cream. Not only did it look a mess,it tasted like one too.Chris made that dish and it was the only one he worked on. True,he fulfilled the minimum requirement for this challenge but clearly this wasn't much of an offering that would showcase his talents to the highest level.

Plus,his other team mates did double duty for the entree and app courses,with Edward in the front of the house position,and by that standard,Chris didn't seem to be a real help to his group there.

Sadly,it was Ty-Lor who was sent off to pack his knives. Despite his hard work in creating at least two dishes(one was a collaboration with Paul) and helping to expedite during service,the food was so under seasoned that the judges couldn't let him stay on. Particularly with his shrimp and crab salad,Judge Tom was disappointed in how bland it was.

Ty-Lor was one of the folks that I've been rooting for this season and I wish him good luck and hope that perhaps we'll see him again,if things go well for him in Last Chance Kitchen(Nyesha seems to be really kicking ass on that front).

Next week will be wickedly wonderful as the chefs have to prepare a scrumptiously sinister feast for Charlize Theron,the Evil Queen in this summer's Snow White and the Huntsman. Will this be a fairy tale ending or a Grimm elimination?: 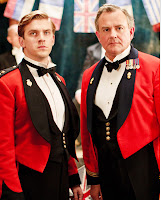 Season two of Downton Abbey started off in the early years of World War One,as Matthew was given a break from the trenches and went home to introduce his fiance Lavinia to the family.

Everyone on the estate was adjusting to the new changes in their world in different ways,as little sister Sybil became a nurse,big sis Mary paraded around her new beau,a newspaper tycoon, and Edith's newly learned driving skills lead her to a possible,yet illicit, romance.

The situation in the servants' quarters was troublesome as well,with the reemergence of Thomas who allowed himself to be injured in order to be shipped home from the front and the departure of Mr. Bates,due to the vicious blackmail threats from his far from loving wife. Poor Anna,she was so heartbroken there! Let's hope that their parting is not for too long.

With a few new staff members and the possibility of Downton being opened up to house the war wounded,this insular world is expanding at quite a speedy pace. Not fast as some would like there but finding a dull moment around this place is about as easy as searching for a needle in a haystack: 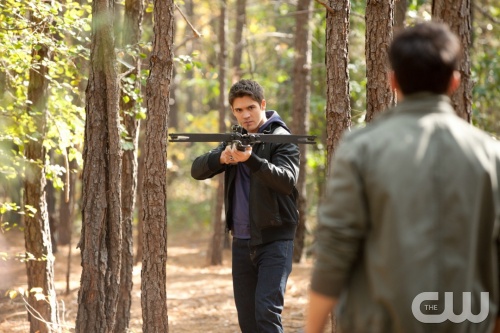 On The Vampire Diaries,the Gilbert family circle is going to get smaller as little brother Jeremy is being shipped off to friends in Colorado. This is being done,courtesy of a compulsion command from Damon,at the request of Elena whose concern for his mental well being is growing.

Considering all that this kid has been through just in the past few months,this is pretty much an act of kindness here. During this season so far,Jeremy has taken meetings with the ghost of his vampire girlfriends,been nearly killed by Klaus and his pack of hybrids as an intimidation tactic against Elena and had to chop off the head of a hybrid on his front doorstep.

On top of that,his new buddy Tyler may have set him up to get slaughtered(smooth move there,Ty!)and he's still not over his break-up with witch girlfriend Bonnie. Speaking of Bonnie,she may not take Jeremy's leaving all that well but then again,she does have other distractions to deal with. Perhaps by the time he comes back,Bonnie's plate will be cleared enough to work things out there:

THE GOLDEN GLOBES: Award show season officially kicks off with another round of trophies and eyebrow raising remarks from returning host Ricky Gervais. Hopefully,there will be more to talk about the day after than which celebrities will want to discuss Ricky's jokes with him in the parking lot with no witnesses: