Before the next round of Top Chef Texas began,the remaining competitors were visited in the break room by Charlize Theron,who wanted to thank them personally for the wonderful food made for her evil queen feast.

Charlize confessed that she's a total TC geek and was thrilled to be part of the show,as well as get to talk to the chefs. They were wowed by that and so was I.

The next day,Cat Cora(who will be hosting a cooking competition show on Bravo called Around the World in 80 plates) joined Padma for the Quickfire challenge. There were three teams of two and all of them had forty minutes to de-vein two pounds of shrimp,shuck a crate of corn and make pasta noodle. With the remaining time,they had to cook a dish featuring those three ingredients. 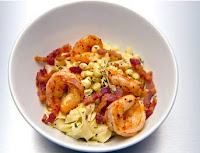 Grayson and Chris were the last team to start cooking but their plate of fettuccine with roasted corn and shrimp won this challenge. Immunity was not on the table but they got to split ten grand,which was pretty sweet.

Paul and Edward might have beat them if Paul had gotten the shrimp on the plates before time ran out. Fortunately,Ed wasn't mad at him for that since they had to go up against each for the Elimination Challenge.

Each team had to make head-to-head dishes that would be served at a food drive/block party for at least two hundred people. Once they decided on their main course and sides,Padma then tasked them to make a light version(since this challenge was being sponsored by Healthy Choice). 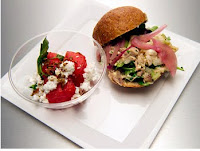 The Top Three for this Elimination round were chosen by the diners,which I think the judges were less than thrilled about in some regards. Grayson and Chris went with a chicken salad sandwich and hers was deemed better,partly due to the fact that she made her sandwiches to order.

Grayson also used olive oil mayo(a low amount)and wheat buns,plus a watermelon salad with arugula,pumpkin seeds and feta. The judges thought it was just okay and in particular,Judge Tom told Grayson that she needed to be more ambitious than that.

She defended herself handily,pointing out that her other competitors went with meatballs and barbecue,not the most daring culinary choices out there. I'm with Grayson on this;after all,this was a block party and most folks would expect a nice sandwich at such a venue. At least Judge Tom accepted her counterpoint with good grace: 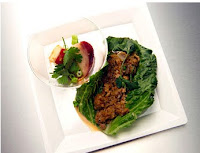 Speaking of good grace,Ed and Paul both went with Asian barbecue yet it was Paul who was declared the winner by the diners and the judges. He used turkey for his kalbi,served on lettuce and made an eggplant white peach kimchi for his side.

He won fifteen grand,which increasing his cash winnings on this show seriously. It's a good thing that Paul is such a nice guy and not a braggart at all. The jokes made about him raking in the dough from his fellow chefs seemed to be kindly meant,a positive thing to see on a competition like this. 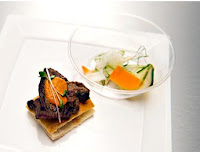 The big problem with Ed's barbecue(other than the meat being too chewy)was that he automatically assumed that Asian style was healthy by default. His kalbi had beef short ribs on homemade bread and a kimchi chipotle puree with pickled cucumber.

Making his own bread earned him a bonus point with the judges but Ed's insistence that he did so as a healthier alternative to rice didn't fly. Dude,they're both starches,that's like switching bacon for ham.

Despite going down the healthy road,Chris had to pack his knives and head off to Last Chance Kitchen(where Beverly has finally broken Nyesha's winning streak). He made the crucial error of preparing his sandwiches ahead of time,causing them to dry out.

While he did make a tofu mayo the judges liked,the watermelon salad that Chris served had pineapple ice that didn't melt well enough. He did try to toss Grayson under the bus by saying that she didn't select ingredients as healthy as his for her chicken salad but fresh made sandwiches are preferable to dried out ones,sorry!

Next week,Pee Wee Herman stops by and yes,everyone is going to the Alamo! The catch is that they have to go by bike,which makes the proceedings that much more interesting,to say the least:

Quite a few changes on Downton Abbey,as Isobel stormed off to France upon being bucked by Lady Cora over who was in charge of the convalescent patients residing in the house and Ethel was given instant notice by Mrs. Hughes,upon being discovered with one of the officers in a truly compromising position.*sigh* I knew this would happen and yet,hope that she isn't totally abandoned here.

The main romantic focus of this particular episode,however,was Mary and Matthew. Everyone is still wanting those two crazy kids to get together but,for the time being,they remain apart in more ways than one.

As Mary is determined to let Matthew go and find happiness elsewhere,reports of him and William being missing in action caused her heart to still beat wildly for him. Even Edith was considerate of her sister for once and gave Mary a heads-up on the situation,which her father wanted to conceal from her as long as possible.

As overwrought as this love story is,you couldn't help getting a little choked up as Matthew made a well timed reappearance at the concert Mary was singing at and joined her for a duet:

That relief will be rather a short one,as next Sunday's episode puts Matthew and William back in the trenches and things may not turn out quite as well. Daisy's doubts about her love for William seemed to mellow when he was unaccounted for,so I hope that he isn't sacrificed to save Matthew. One heartache shouldn't outrank the other:

A new season of The Amazing Race is set to begin on February 19 and the list of teams has been announced. Amongst the contenders this time are a married couple in the Army,two female Federal agents,a pair of former Big Brother contestants and a couple of clowns.

No joke,one of the husband and wife teams are professional clowns,the kind who work for Ringling Bros and Barnum Bailey circus. Right off the bat,I love these two and rooting for them to laugh all the way to the finish line before hitting the bank:

LUCK: HBO is about to air another dramatic series involving gambling,only this time it's set in modern times. Dustin Hoffman stars as a horse racing enthusiast just out of prison who is looking to get back in the game. With stellar back up support from the likes of Nick Nolte and Dennis Farina,this could be a real wild ride: