Have you ever tried to read a book but couldn't get past the few couple of chapters and eventually wind up giving your copy away,only to have it find it's way back to you?

That's happened to me on occasion,with my most recent reunion being with Outlander by Diana Gabaldon.

I remember snapping up it from a local drugstore paperback rack many years ago and giving it a shot,yet for some reason it wound being included in one of my thrift store donation bags(my tried and true method of making more room on my bookshelves)and was chalked as another failed fictional attempt. 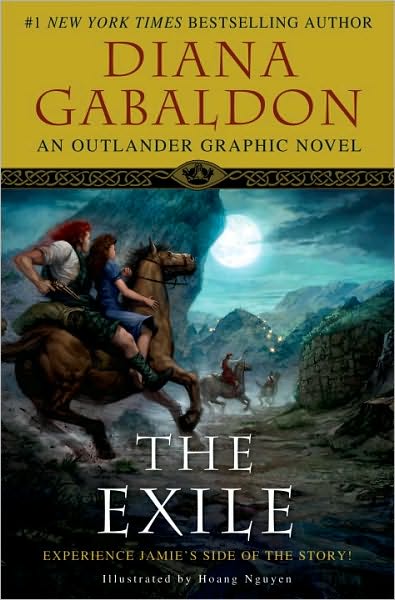 During my last visit to New York Comic Con,I stopped by the publisher's booths and one of them happened to be handing complimentary copies of Outlander(probably to encourage Comic Con attendees to check out the tie-in graphic novel based on the original book).

I figured,"Hey,why not? Free book!",plus by this time it had several sequels and a strong fan following. Not that those elements alone are a guarantee of greatness but it did make me want to take on this saga yet again.

Also,my interest in fantasy lit has been growing in the past couple of years and since that is one of the key factors in this continuing plot line,the timing seemed to be all so right:

Well,so far I am knee-deep in the story and over this past weekend,I've ordered the next three books in the series(there are seven books in total,with an eighth scheduled to be released in early 2013,plus a set of companion works known as the Lord John Grey series).

It's one of those reading experiences where you wonder why this book didn't click with you sooner but wasting time pondering over that, when you could be engrossed in a truly engaging tale instead,is fiction lover's foolishness.

One of the things that attracted to Outlander both then and now is that the heroine,Claire Randall,is a former nurse,similar to my mother,only Claire gained most of her work experience on the battle field. The book starts off in 1945,where Claire and her husband Frank are having a long overdue second honeymoon in Scotland.

The two of them were separated during WWII and hoping to pick where they left off before the war. Part of their reason for being in Scotland is Frank's interest in the local history,as well as tracing his ancestral line,and while Claire is less than thrilled about having to compete with academics for his attention,she is more than willing to do what it takes to reconnect:

During their exploration of the Scottish countryside,Claire comes across a set of standing stones out in a field and at one point,steps into the center of them at precisely the right and wrong time. Suddenly,she is transported over two hundred years back in time,to the 18th century.

There,she encounters an English officer who is a predecessor of her husband Frank,although with a very different disposition from his descendant,and a number of Scot clansmen,including a young outlaw named Jamie who has had personal dealings with that unfortunate relation of her husband's.

Particularly all of them are convinced that Claire is a spy for someone but her knowledge of medicine earns her some trust amongst the Scots. That,and the Highland code of honor,offer Claire some protection.

Jamie is also more than willing to believe in her and even agrees to marry her in order to keep Claire out of the hands of the Englishman they both dread and fear. Jamie's determination to keep to his personal definition of honor is something that Claire admires and finds frustrating as well:

What makes this book a bit more enticing to me now,I think,is the blend of genres within this narrative. You've got a double dose of historical fiction with romance and fantasy along for the ride ,which even the author has stated has caused quite a bit of confusion amongst marketing people. Since my own writing has some of this mix and match elements to it,I can sort of relate.

However,a good story will find an audience no matter where it's placed on the shelves. All it takes are a few satisfied readers and reviewers to spread the good word and if Gabaldon can do it,so can others whose writing can't be boxed into just one corner of the literary marketplace.

Even though it took some time and distance for me to enter the Outlander realm,perhaps that path was the best one to take in my case. You can't hurry love,as they say,and that maxim holds especially true for books. One might feel guilty about diving into previously published books rather than seeking out the new reads on the block but sometimes,it's hard to feel wrong about something that reads so right: