Getting the inside scoop on Downton Abbey style domestic affairs 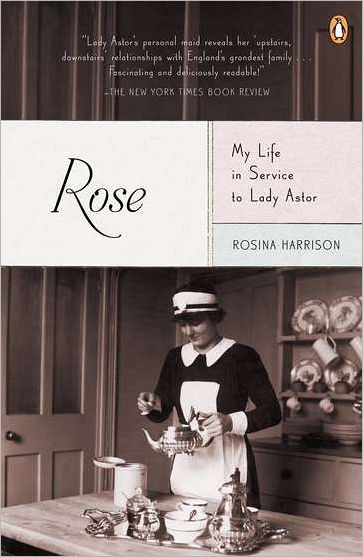 Even though we have another year to wait for the next installment of Downton Abbey,there are still plenty of ways to satisfy our craving for such rich period fare. While finding a good novel about the lifestyles of the extremely well-to-do of that time is a fun option,so is picking a true life account of their servants who saw much and said little,until a good many years later.

Right now,I'm reading Rose:My Life in Service to Lady Astor by Rosina Harrison,first published in 1976. Rosina,called Rose,had been a ladies' maid in several homes before landing a position with Lady Nancy Astor,the first woman in England to hold a seat in Parliament.

Putting up with difficult people and dealing with unexpected changes was becoming an old habit to Rose in her line of work but Lady Astor was an original in that department in more ways then one. Despite the struggles she met on a daily basis with her employer,Rose managed to stay"in her place" yet not allow Lady Astor to treat her like a doormat either. I know that this book wasn't the basis for this particular character on the classic "Upstairs,Downstairs",however she does remind me quite a lot of Rose Buck,the head parlor and occasional ladies' maid who spoke her mind to her bosses when she felt the situation warranted it:

A memoir that is more of a direct influence on that series is Margaret Powell's Below Stairs which was released originally in 1968. Mrs. Powell began life in service as a kitchen maid and worked her way up to cook,all the while observing the comings and goings amongst her fellow staff and residents of the household whose scandals and secrets weren't as well concealed as they should be.

She achieved a nice taste of fame during her lifetime,as the success of Upstairs,Downstairs gained Mrs. Powell a little celebrity status in Britain during the early to mid seventies,with a few TV appearances and even a commercial endorsement to boot:

Although most of the tell-all tales of domestic servants came from the ladies,there was one from the male point of view as well. What the Butler Winked at is Eric Horne's account of his life and times as a butler,a job that he performed to the best of his ability for over fifty years but wasn't his ideal choice of occupation.

Horne talks about the lack of independence servants could get from their employers,particularly financial independence when it came time for many of them to retire. His sharp insights into high society of that period(as well as his fellow staff)show that the old stereotype of the servant being smarter than the master wasn't entirely based upon a writer's whimsical notion:

It is wonderful that there are written remembrances of those days from more than one end of the social staircase as interest in British social classes will no doubt be fine fodder for future fictional entertainment. Downton Abbey may only have one season left to go,but like many of it's TV predecessors,that series will pave the way for others to follow on both sides of the pond. Whatever new angle this genre will explore,it will help to have some solid literary ground for the audience to stand on: