A grey light shines on a GOT family reunion,two TAR teams have an airport smackdown and Mad Men's sinister vibe

An expansion into one character's background was made on Games of Thrones this week,as Stark ally Theon Greyjoy went home to the Iron Islands to negotiate with his father for the use of his ships to fight the Lannisters at King's Landing. However,his expectations were rather high as daddy Balon isn't exactly ready to roll out the welcome wagon for him.

Theon didn't help matters any by not recognizing his now grown sister Yara(originally named Asha in the books),who lives more by the "iron price" and has her father's full trust in military affairs. While it's certainly not fair of Balon to take out his frustrations about losing a previous rebellion to the Starks(in which Theon was taken as a child hostage for all intents and purposes),Theon is doing himself no favors by expecting the reins of power to be automatically handed over to him:

While we'll be seeing more of the Greyjoys this season,other key players are beginning to make their moves as Catelyn discovers next time when she pays a visit to Renly,the other Baratheon eager to claim the Iron Throne.

Also,tensions are brewing between Tyrion,Cersei and Littlefinger while Arya and her new friend Gendry are sharing secrets and trying to save each other's lives. Thank goodness HBO gave the nod for a third season because you know there is too much plot excitement to contain in only two runs: 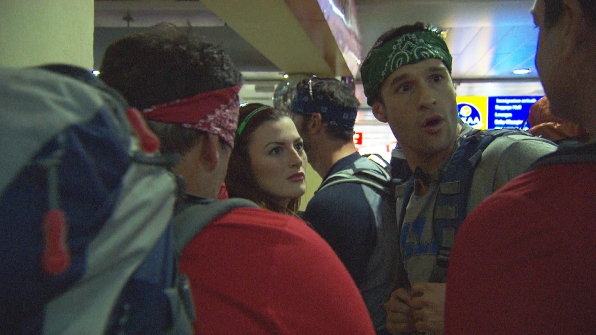 As the teams on The Amazing Race for this leg were changing planes on their way to Tarzania,two of them got into an open verbal brawl. Team Big Brother(aka "Team Big Baby" to some)pushed and shoved their way forward,with one of them making a classic rude hand gesture.

That got Vanessa and Ralph(Team Divorcee)understandably mad(plus a few other teams as well)and words were exchanged. Granted,some of the comments on both sides went below the belt,but I hold Team BB responsible for this mess. Particularly Rachel,who doesn't know when to shut up and when it is the right time to act her age: The specter of Richard Speck's mass murder spree hovered over Mad Men last episode,as Don brutally murdered a nightmare image of his past infidelities, Sally formed a weird bond with her step-grandmother and Peggy gave an impromptu invite for a sleepover to new secretary Dawn when both of them were too nervous to leave the office alone at night.

The major shakeup of the show occurred when Joan finally kicked her creep of a husband to the curb. The guy has been nothing but a yoke around her neck since day one and his pathetic need to feel manly has taken this couple down some very dark turns. Good for her that she decided to strike out on her own,even if that means her instigating mother won't be leaving her side any time soon:

KATHY: Yes,the feisty comedienne is getting her own talk show on Bravo,complete with appearances from her equally opinionated mother and no doubt a few surprise guests. As outrageously entertaining as her stand-up specials are,I'm hoping for Kathy Griffin to really let her freak flag fly here,along with a few great commentaries on our pop culture world: