GOT players rethink their strategy,The Next Food Network Star takes a tongue tied tour and a not so merry Mad Men Christmas 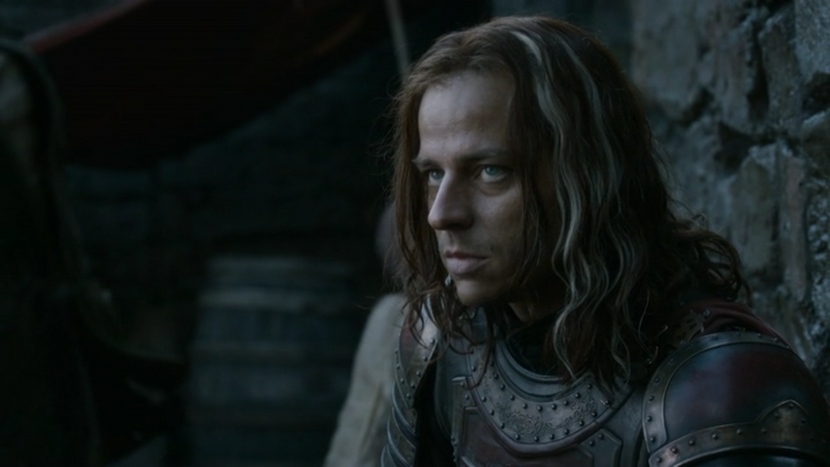 We're getting close to the end game on this season of Game of Thrones and already,some folks are considering their previous moves.

Arya,for one,in her deal with Jaqen regarding the three names to give him to settle their debt. She wants to stop Tywin from marching on her brother Robb but he departs with his men too soon for her to cash in that final chip with the mysterious assassin.

With Tywin too far out of reach for elimination,she forces Jagen's hand to have him help her and fellow enforced laborers Gendry and Hot Pie to escape. By naming Jagen as the last to die,Arya manages to use her advantage well but there is still bloody business between these two that will be concluded before all is said and done here: 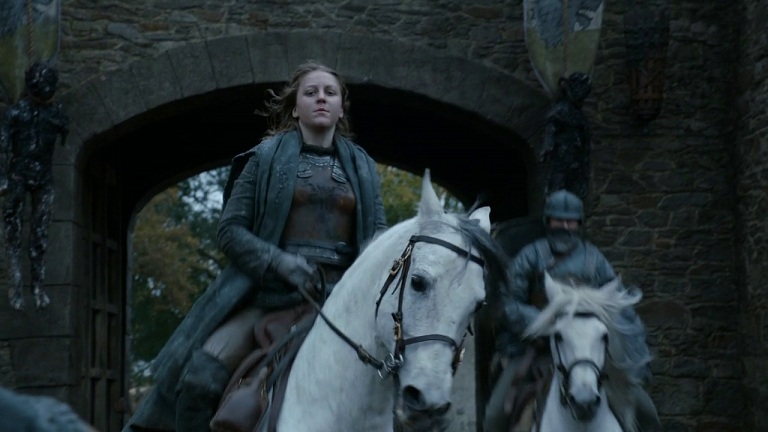 Meanwhile at Winterfell,Theon's sister Yara arrives with only a handful of men,causing Theon to wonder why his family isn't sending more support his way.

Turns out that the Greyjoys have no interest in Winterfell due to it's distance from the sea and that Yara has arrived to take her baby brother home for a chat with Dad.

Theon is less than thrilled with that response and even less receptive when she proceeds to tell him how stupid his actions have been,especially in killing the Stark boys(who are not dead,rather hiding in plain sight,thanks to Osha and the Maester).

Once they are alone,however,Yara does give him some heartfelt advice,which if Theon had any sense he would take. He'll regret his ruse regarding Bran and Rickon soon enough and with worse consequences that he thinks:

The challenge this week on The Next Food Network Star was for each team to act as foodie guides for a group of tourists on board a bus.

They were assigned different New York neighborhoods and eateries to highlight-Team Alton had the Lower East Side,Team Bobby was given Harlem and Team Giada wound up with Arthur Avenue,which plays into her specialty nicely. They also had to make a dish related to the places they were taking about and add their own twist to them.

Speaking of specialty,I'm starting to notice a trend rather quickly amongst the contenders who wind up in the Bottom Two. Both Judson and Kara were not happy with the food choices being offered to them at their respective locations(pickles for Judson,chicken and waffles for Kara)and therefore,let that lack of enthusiasm show in their presentations and in the food.

The same thing happened last time,with Kistie's displeasure over the soup course leaving a bad taste in everyone's mouth. Guys,you can't expect to play in your own ballpark every time-what kind of contest would that be? Judson stayed and Kara left,which I think was the right choice since his presentation was much more polished and he can learn to blend in more sincerity in his persona. Next time,the teams will be facing a Chopped challenge and Chopped judges,which should be fun and then some:

Christmas time arrives on Mad Men and Santa has quite a few interesting gifts in his bag for the gang at Sterling Cooper Draper Price. Don gets a frustrated wife and a broke plate of spaghetti,Joan gets a summons for divorce and the firm is granted another shot at landing a huge car account.

Some folks decide to treat themselves,such as Don and Joan who take a break from work with a test drive and a lovely flirtation at a bar. Neither of them will ever hook up with the other,since they are both up on each other's game too well for that. It is nice,however,to see them enjoy the moment away from familiar eyes for once.

Lane's gift to himself is a forged bonus check,to pay off some back taxes back in England. Oh,Lane,this is going to end so badly,I can feel it in my bones. Then again, he might get a special Santa surprise with the possible new deal coming though. I hope so,for his sake:

TRUE BLOOD: A delightful addition to the cast this upcoming season is Christopher Meloni,best known as Eliot Stabler from Law and Order:SVU. He'll be playing Roman,the leader of the vampire officials called The Authority and he certainly has the commanding presence for that part. Meloni has been on a HBO series before,the prison drama OZ and fans will have to see for themselves whether or not his new role is more threatening than that previous jailhouse stint: