Pop culture castles falling out of the sky

One of the most talked about documentaries of the season is Lauren Greenfield's The Queen of Versailles,which covers an elaborate building project by wealthy couple David and Jackie Siegel,who wanted to have a home in Florida that would rival the world famous palace in France.

That goal was derailed,due to the economic downturn over the past couple of years that forced the family to scale back their way of life. The movie has received quite a bit of praise,not to mention a lawsuit from the subjects of the film who insist that they are being misrepresented here.

Such a complaint is becoming commonplace in our reality star realm yet it might behoove these two to follow the old show business dictum about taking what PR they can get,as long as their names are spelled right. After all,they could get a sweet deal on Bravo out of this: 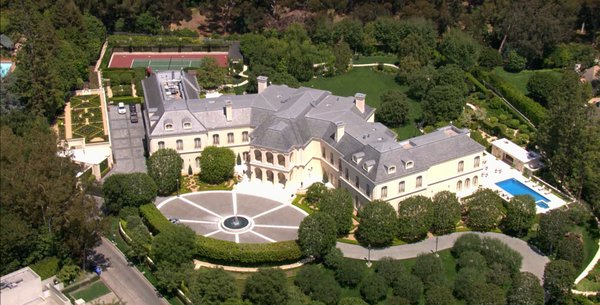 Speaking of sweet deals,Candy Spelling managed to make the clearing out of her former mansion(to make way for a new owner within 30 days)a TV special last winter.

Selling Spelling Manor was a two part show on HGTV that not only showcased the major efforts involved in packing up,it also highlighted the over the top elements of the house that had three rooms set aside for gift wrapping,plus a doll museum. While some of the assembled goods were donated to charity,most of the Spelling manor contents went towards furnishing the former lady of the manor's new condo,so it's sort of a happy ending,I suppose: I find it interesting that the pop culture switch has been reset for the iconic image of the new American home. Time was,building and/or rebuilding your very own house was something to celebrate,a sign of achieving a major life goal. The excesses of prospective home owners who didn't have a clue about what was needed or sensible towards creating their household was mocked but in a friendly way.

From the classic comedy Mr Blandings Builds His Dream House in 1948 to the dismal 1986 retread The Money Pit,,there was clearly a love-hate relationship towards house building with love winning out in the end:

Nowadays,hate seems to have the upper hand,adding a snort of derision towards the rich folk forced to retrench. In some ways,that's more than understandable given the current economic situation our country is in these days. Also,some of these former Richie Richs have entitlement issues that make it hard for someone depending on coupons to cut financial corners to feel the least bit sorry for their plight.

Yet,some sympathy for even the overly privileged amongst does slip in,for example the trials and tribulations of one of the leading ladies on 2 Broke Girls who is adjusting to a more downtown lifestyle.

However,one could argue that resentment of the better homes and gardens set has always been on the social back burner and only brought to the forefront during hard times. You don't have to go too far back to see this,as the mid to late 1980s brought us the satirical likes of Down and Out in Beverly Hills and the dark divorce comedy War of the Roses,which turned the feuding couple's massive home into a literal battlefield:

I wonder just how long it will be until grand houses are celebrated in our culture again. Don't get me wrong,excess is not a good thing and I myself wouldn't want such a big house to deal with(the idea of cleaning several bathrooms alone puts me right off).Yet,having such a dwelling is a motivating dream for those looking to do well in life and totally crushing it would be a real shame.

So,perhaps the best sign that things are turning around is the revival of posh estate love in pop culture. Hey,isn't easier to reach for the stars when you get to watch the stars play in their very own custom made sparkly settings?: