Welcome back for another round of Bad Movie Month and on our docket for today is 1987's Dragnet,the attempted revitalization of the classic 1960's crime drama that most remember for Jack Webb as lead detective Joe Friday with his crime-fighter catchphrase,"just the facts,ma'am."

Apparently,Dan Ackroyd recalled that series fondly,since he took the lead role of Friday's nephew(also named Joe Friday)carrying on the family tradition in a more modern setting. Unlike the previous film incarnations of Dragnet(a theatrical 1954 release based on the radio show version and a made for TV movie in 1966 that was actually aired in '69),this was meant to be a comedy yet the laughs are few and far between.

The new generation Friday is partnered with Pep Streebek(Tom Hanks),the Oscar to his Felix as this film's odd couple of leading men and the two of them are sent out by Captain Bill Gannon(Harry Morgan,who played Jack Webb's partner in the original series)to look into some strange robberies in the area. Most of their leads point them in the direction of a cult that calls itself P.A.G.A.N.(People Against Goodness And Normalcy). Subtle,no?:

During their undercover work,which consists mostly of the guys wearing outlandish costumes that would look out of place in a Halloween parade,Friday and Streebek rescue a gal named Connie Swail(Alexandra Paul)from being a virgin sacrifice thrown to a giant snake by P.A.G.A.N. and for the rest of the film,she's known as The Virgin Connie Swail since that's what Friday keeps referring to her as.

Most of the plot here is pretty boring and full of loop holes such as how did the cult know Connie was a virgin in the first place and what benefit would they get by targeting her?

To his credit,Ackroyd does commit himself to a full on Jack Webb impersonation and if this was a running character for a Saturday Night Live skit(I believe he did do a Dragnet bit on the show once when Desi Arnaz was the host),that would be fine. Unfortunately,his talent for mimicry was being wasted on an audience that didn't get his references at all: 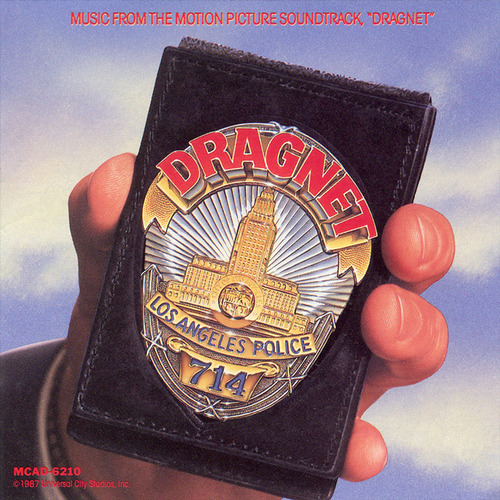 The main problem with this take on Dragnet was that weak attempt to make a parody of a pop culture favorite that would work for older fans and engage the younger section of the audience. What they wound up with was a half baked hybrid that failed to please anyone.

The "hip-it-for-the-young-people" marketing was particularly painful in the soundtrack for this film,which had the band Art of Noise do a remix rendition of the TV show's instantly recognizable theme. That choice dismayed critic Roger Ebert(who otherwise liked the movie)so much that he"walked out of the screening singing the notes(of the original version) out loud to drown out the disco Drano from the screen." :

To be fair,that last quote was mainly referring to the song that played over the end credits,"City of Crime",a rap tune performed by Hanks and Ackroyd with a video that did some hard time on MTV's rotation that summer.

Dragnet was sentenced to shelf life on video store racks after it's less than successful run and some do consider it to be an underrated film but I prefer to be paroled from seeing it again. Check in with Bad Movie Month next Friday to see how Lost In Space we are and until then,keep on your goat skin pants when you do an unlawful dance or the officer in charge will add on to your list of offenses as he reads you your rights: