Things are getting even crazier on True Blood,as the TB factory bombings are making both humans and vampires nervous,not to mention affecting business at Fangtasia. New sheriff Elijah is full of terrible suggestions on how to improve the profit margin and has a new mandate from the Authority;turn at least 30 humans into vamps by the end of the year.

Pam is less than thrilled with this new regime and suggests to Tara that the two of them make like a tree and leave. However,Tara has had enough of the cut and run so she pulls a ruse on Elijah that allowed her to take him out Ned Stark style. Pam was certainly surprised but not altogether unpleasantly there,in my opinion:

Meanwhile,Sookie and Jason do a little more investigating and discover an ancient scroll hidden beneath the floorboards of Sookie's bedroom. After taking it to a local linguist,who can confirm that it is at least a couple of hundred years old but not in any language known to man,they head over to the fairy bar to ask Claude if he can translate the writing.

He can't but one of the residents of the fairy bar can. Maurella,who I think is pregnant by Sheriff Andy from their brief encounter last season, tells them that a Stackhouse ancestor promised the first female fae of his line to Warlow and guess who that happens to be,folks! Well, this more than likely means that Warlow will be coming to claim Sookie soon,especially since we only have two episodes left for this season and hopefully,that showdown will be worth the wait:

On Bunheads,Sasha and Fanny are still on the outs,with Fanny driving everyone mad by her nonstop auditions for a Nutcracker Clara and Sasha acting as if cheerleading is a real relief from ballet.Granted,Fanny's strict standards do make that argument easier but clearly Sasha is not as thrilled with her new social circle as she tells her friends.

Michelle did take some time out of her campaign to get the new supermarket open(mainly to avoid dealing with the town's quirky barrista)to encourage Sasha to make amends with Fanny,which should occur next week during the summer season finale. I know this show is a little awkward at times but it does deserve a second season to show what it really can do: Gordon Ramsay's new makeover show,Hotel Hell,debuted this week and frankly,I wasn't sure about this one but wow,what an opener! It was a two part episode that featured a place called The Juniper Hill Inn,a huge estate where the employees had to practically beg for their paychecks while the owners were more interested in stuffing as many "antiques" as possible into the building.

At one point,Gordon got a tour of the stash spots and it was close to Hoarders territory,let me tell you. Not to mention that when an auction house assayer came in to price some of that stuff(as a means of making up for the wasted amounts of money),it was worth way less than what they had paid for. Plus,the suite that Gordon was first put in reeked from a broken toilet that hadn't been fixed yet and that was just the tip of the iceberg,folks:

Gordon managed to get that house in order,for awhile at least,and despite my initial doubts,this series appears to be worth watching. Kudos to Ramsay and company for finding a new venue for him to showcase his gentle methods of persuasion: 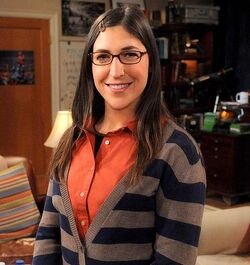 GET WELL SOON: to Mayim Bialik, currently seen on The Big Bang Theory as Amy Farrah Fowler,who was injured in a recent car accident.

Fortunately,she is expected to make a full recovery and was able to let her fans know that she'll be okay and back to work soon. Best wishes on a speedy healing process,Mayim,and happy to hear that you'll be able to strum Amy's harp strings once again: