An Austenesque Autumn with a cup of Matchmaker Mishap tea

September is here at last and if you're in a Jane Austen frame of mind,the best place to be at this month is Austeneque Reviews.

This delightful blog that is devoted to literary works inspired by Austen's novels is having a 30 day salute to Our Dear Jane's legacy this season with their Austenesque Extravaganza.

That title gave me an amusing idea for my post today,which is themed Matchmaker Misunderstandings. I will be featuring a bit of a mix and match between traditional Austen and re-imagined Jane to highlight those moments where even the most well meaning interference in romantic affairs are met with misdirection and mistaken notions that changes the course of the characters' lives in so many ways: 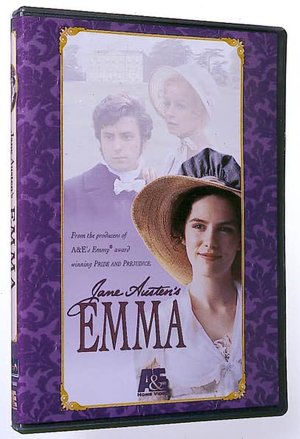 We couldn't start this overview without a visit to Emma,the queen bee of Austen matchmakers. While Emma is busy arranging for suitable to her own tastes suitors for sweet yet easily lead Harriet Smith,she seems to have no idea that her good friends Mr and Mrs.Weston hope that their son Frank Churchill would be interested in her as more than a friend.

Emma has no objections to being courted by Frank,who shows her much attention and is entertained by his professed indifference to the quiet charms of Jane Fairfax. Emma may be clever but she's not savvy enough to realize that when a man is quick to downgrade another woman to the lady he's with,chances are that his feelings regarding that woman are rather the reverse:

For a post modern twist,let's take a look at The Jane Austen Book Club and in particular at Jocelyn,who fancies herself as the Emma Woodhouse of her group. When meeting the amiable Grigg on her way to a dog breeding convention,his interest in her does not register high on her romance meter. Jocelyn's cold shoulder gives him the chills indeed.

Yet,another chance run-in allows that flame to reignite,however what Grigg doesn't know at this point is that Jocelyn is sizing him as more of a ideal match for one of her girlfriends(who is getting divorced and in need of a rebound romance) that as a potential partner for herself:

And now for a double dose of Mr. Collins. Amanda Price,the heroine of Lost In Austen, is torn between living out her dream of being in the pages of Pride and Prejudice and fearing that her presence will cause an uproar amongst the characters that could derail their intended plot lines.

Mr. Collins,naturally,is one such pitfall that Amanda wants to protect Jane Bennet from. However, her awkward attempt to throw Charlotte Lucas his way only makes Mr. Collins think that it is Miss Price who desires his less than desirable affections:

In The Lizzie Bennet Diaries,Ricky Collins(who would rather be called Mister)has made his frequent visits to the Bennet household a reason for Lizzie to dread dinners with her insistent-upon-marrying-her-daughters-off mom far more than usual.

Yet,on this occasion,Mr. Ricky Collins does an offer to make to Lizzie but it happens to be more on the professional rather than the personal side. That proposal doesn't appeal to her either way not will that refusal on a non romantic front please her desperate housewife of a mother: 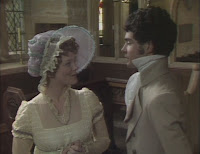 Finally,we venture over to Mansfield Park,where romantic misdirection is the order of the day. Upon their first meeting,both Maria Bertram and Henry Crawford contend to their nearest and dearest than they are not attracted to each one.

Since Maria is already engaged,that point is pressed on particularly by his sisters to Henry,who declares that he prefers younger sister Julia the best.

Despite such claims,his comments about the eldest Miss Bertram's nature tell a different tale. Maria also echoes that sentiment to her sister,yet her competitive spirit will not allow her to yield on that front gracefully:

I hope that everyone is enjoying their Labor Day respite and that all of my fellow Austenites flock to the celebration going on at Austeneque Reviews the rest of this month. I also hope that Austen fans keep in mind that no matter what misguidance a matchmaker in either Jane's time or ours can give,a happy ending for any set of true loves is never in doubt: