How sensible is it to suppress books about suppression?

The ugly head of censorship is rearing up in the Chicago school system,as seventh grade students have been deemed not ready to handle the likes of Persepolis in the classroom.

Marjane Satrapi's graphic novel memoir of her troubled childhood
in Iran(which was made into an animated feature film) during the early times of the regime change was part of a curriculum designed for grades 7 through 11 but has been pulled from  from the lower grades(juniors and senior classes,along with Advance Placement students,are still allowed to have the book in their courses),due to the "graphic depictions of violence" within it's pages.

As someone who has read Persepolis(and it's sequel,Persepolis 2),the violence in this story is not only necessary but an accurate description of what many people went through then and are still subjected to now in this part of the world and it's  all the more shocking for being true to life. Considering how many acts of violence young people see both in other fictional formats and in the media,the whole notion of shielding them from a story that displays the full emotional impact of such actions is a disservice to the educational system.

Fortunately,the students and teachers(plus other supporters of free speech)are not taking this lying down. Protests regarding this decision have been held and local booksellers have reported increased demand for the book,which will hopefully open more than one set of eyes to it's true message of overcoming adversity against all odds:

Meanwhile,concern has been raised regarding certain books for third graders in NYC schools that discuss troubles in the Middle East. While these books have not been banned,protests from those who believe that the children are too young to learn about this subject have been strongly made.

One of the titles in question is The Librarian of Basra by Jeanette Winter,who has written and illustrated many books for children in this age range. I remember this book from my bookselling days and it's the true story of Alia Muhammad Baker,who saved the entire literary collection of her city's library from destruction(which numbered 30 thousand volumes)without any assistance from the officials in charge.

Anyone with a love of reading or who just understands the value of protecting literature for present and future generations would want young people to know about such a brave lady,in my opinion. I don't see any relevent reason for not allowing teachers to  introduce the realities of this section of the world in such a thoughtful and appropriate way: 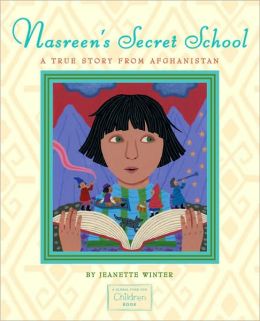 Another of Jeanette Winter's books is also called into question here,Nasreen's Secret School. The story is narrated by a grandmother in Afghanistan who is raising her granddaughter alone,due to the family being separated by Taliban invasion.

The girl has remained silent from the shock but by taking her to an all girl's school that must be kept secret from the authorities, since educating women is forbidden, Nasreen's grandmother hopes that the child will be able to open up to others as well as get the knowledge that she rightly deserves. Such a powerful tale(which won a Jane Addams award in 2010) that showcases the value of education for young women sounds ideal for any age,if you ask me: While I'm not about to lecture anyone on the politics regarding our nation's involvement with the Middle East, we can all agree,even reluctantly,that our connections to the conflicts in those countries are not about to be severed any time soon. Therefore, giving our kids access to information about what life is like for folks over there and how it affects them and us is only sensible as well as smart.

Particularly for young women and girls,to show them how hard others of their gender have to struggle to be educated and respected, these books should be inspiring beacons of hope. Let's not dampen their fighting spirit by keeping these pages closed to them,boys and girls alike. Knowledge is power and that power can be used wisely by those who are properly educated: