Dealing with Billith on True Blood,Mad Men's mercy and the American Baking Competition sees where it's bread is buttered

With the Vampire Authority shattered to bits and the state of Louisiana declaring marital law on all vamps,things are dicey to start with even if the newly resurrected Bill,aka "Billith" wasn't around to deal with. His reborn status is still yet to be determined as to friend or foe but one thing is for certain and that is he is damn harder to take down than ever before: 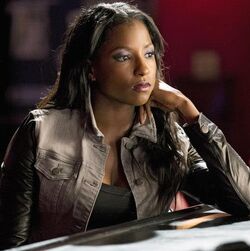 A lot of relationships have to be worked out this season,including Tara and Pam's. I have to agree with Tara about Pam's need to latch on to whatever Eric is involved with. Time to let go,hon,seriously.

He did release her from the sire bond for a reason and clearly,he wasn't always forthcoming about his past,so she really should figure out her own course in life to take,especially with the state stepping in to take Fangtasia.

Tara's fiery independence and spirit of loyalty will probably be more of use during the tough times ahead than Eric's future game plans with Nora:

We're close to the end of this run on Mad Men and it appears that Don has done a good job alienating Sally,who refuses to see him and is now attempting to enter boarding school as a means to avoid any dealings with her dad in the near future.

So,what does Don do? He takes out his frustrations on surrogate daughter/protege Peggy by torpedoing her shot at getting credit for a new ad campaign that references Rosemary's Baby(kind of weird for a baby aspirin commercial but very forward thinking) . True, she and Ted were acting far too close for comfort in their office flirtation there but slamming down that window of opportunity for Peggy will come back to bite Don one way or the other.

Meanwhile,Pete's efforts to rid himself of Bob Benson bore unexpected fruit as the truth of Bob's sketchy past was brought to him by old rival Duck. Pete immediately saw Bob as the latest version of Don Draper and instead of showing him the door,decided to turn the tables on his unwanted admirer.

I have to admit, seeing Pete switch from Margo Channing to Addison DeWitt in handling Bob's Eve Harrington desires(see All About Eve,folks,trust me-it applies here) is an intriguing twist and I hope that this love-hate relationship gets carried over to the next season:

It was bread week on The American Baking Competition and since bread is judge Paul Hollywood's specialty, tensions were rising fast than the baking dough. The Signature Bake had a number of interesting loaves while the Technical Bake was all about pretzels,with a mixed batch of results yet Darlene managed to come out ahead.

She also aced the Show Stopper,which required both plain and filled croissants and was up there with Brian for Star Baker. However,his whining to the judges during the Signature round about not having won that honor yet(someone got too much praise as a child,imo) did Brian's chances in there. Apparently,the croissant gods like to have a dash of humility added to their recipes:

UNDER THE DOME: Next week,the Stephen King based series makes it's debut and while there will be quite a few changes from the original book(which is worth a read,btw), this should be standard King fare with a touch of TV magic to keep things lively: