Happy July Fourth,folks and we kick off our TV Thursday with some of the gang on True Blood seeing red about the new crackdown on vampires. Not only is Steve Newlin beginning to regret his bitter divorce with his ex-Mrs. running the secret camp for vamp experiments but the Governor is already having a few doubts about his plans as Eric has made off with his daughter Willa.

Willa is proving herself to be a useful hostage,as she spills the beans regarding the vampire camps to Eric, plus a taste of TMI when she also tells him that the real reason her father is so anti-vampire is due to her mother running off with one.

If Pam doesn't get her way by having Willa's head ripped off, this could be an interesting transition relationship for Eric to have.

Meanwhile, Sookie is up to her ears in trouble as usual. With Jason and Grandpa Niall looking to protect her from the clutches of Warlow, the last thing she needed was a visit from Billith but stop by he did(and the invitation clause for vampires apparently no longer applies to him).

Billith wanted Sookie to donate her fairy blood to his new plan for protecting vampires by giving the scientist responsible for True Blood some to turn into the ultimate sun block. She flatly refused and I don't blame her,considering his new attitude, but that is going to put Andy's foursome of fae girls(who are in their teens at this point) in Bill's line of fire. The story connections are rather sturdy this season but I think that Warlow needs to show up and get this party started for real:

On Under The Dome, tensions went up a notch as Julia let everyone in town know that the government forces outside are calling their invisible prison a dome,which understandably has them even more freaked out.

What she doesn't mention is that,based on the transmissions from local radio station engineer Dodee's(whose character rewrite I am liking a lot)rigged receiver, that the official powers that be have no clue what this is. I think at some point the radio station is going to be taken over by someone looking to take charge of things *cough*Big Jim*cough* in order to control the flow of information that can be gleamed from the outside world: 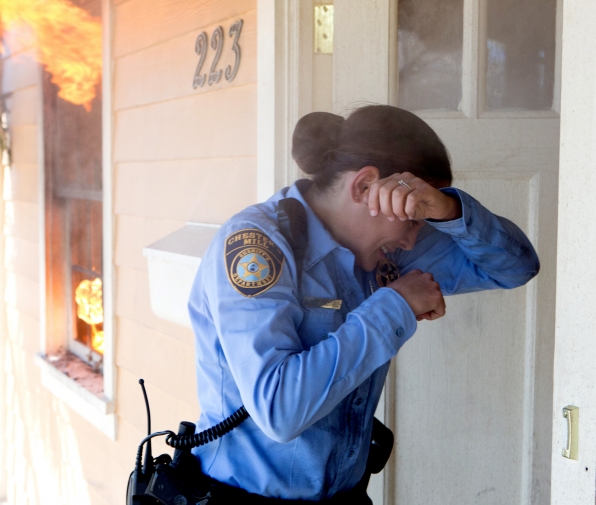 A more immediate danger was the fire set somewhat accidentally at the home of the recently deceased Sheriff Duke. Big Jim was concerned about what evidence of the propane hoarding was still there,so he got Rev. Coggins to search and destroy any incriminating paperwork before Deputy Linda(who was given the house in Duke's will) could take a look around.

Everyone managed to work together to put the flames out and while that small victory gave them some hope, it's only a drop in the bucket of troubles that Chester's Mill is stuck in,with the only thing being certain is that,despite appearances, Big Jim is up to no good, one way or another:

It was the semi-finals on The American Baking Competition last night and the theme was French pastries. It was also a double elimination, leaving three competitors left in the kitchen for next week's finale.

The Signature Bake was a tarte tatin  and the Technical was a napoleon,with the Show Stopper being a choux tower(or as some of us know it, a croquembouche).

Hate to admit it,but Brian did his best work here and rightly earned the title of Star Baker. He will be going to the finals with Darlene and Francine and while it was nice of Brian to help James out, I'm still rooting for my girl Francine to take the big win home:

FOOD NETWORK STAR: In the tradition of Last Chance Kitchen, eliminated contenders are being given "Star Salvation" rounds in order to win their way back into the game. It's a pretty cool idea and as long as certain obnoxious people(yes,Danushka,this means you) don't return to the foodie fold, this second chance is worth taking: