The best moments to be found while Lost In Austen

No sooner do I finish off a most formidable chunk of my Pride and Prejudice Bicentenary Challenge with Mr. Darcy Takes a Wife,then I spend a glorious night with another by revisiting the delights of Lost In Austen.

This charming British miniseries(which is available on DVD in the US) stars Jemina Rooper as Amanda Price,a modern day gal who escapes into the pages of her favorite Austen novel whenever life gets her down. That escape proves to be a mutual affair,as Elizabeth Bennet starts appearing in her bathroom and the two of them make a mystical swap,with Amanda in the world of P&P and Lizzy experiencing the 21st century.

Most of the story is focused on Amanda's adventures, as the plot lines of her beloved book are becoming topsy-turvy and her efforts to maintain the original actions of the characters only serves to make everything even more complicated than before. The cast is solid,with the likes of Hugh Bonneville(Downton Abbey's Lord Grantham) as Mr.Bennet,Alex Kingston as Mrs. Bennet and the gorgeous Elliot Cowen as Mr.Darcy.

Since this series has been out for awhile,I thought it best to highlight some of my favorite scenes and hope that you share my enthusiasm for these particular moments:

Mr. Collins Gets What's Coming to Him: At one point,Amanda agrees to marry Mr. Collins in order to save Jane from that dreadful fate. His interest in her is keenly about her alleged fortune of 27,000(her yearly salary in the real world,no doubt) but once rumors of her family's fortune being due to fish-mongering, he drops his suit faster than a hot potato. She's fine with that(and annoyed at Wickam,for spreading such a story)but when Mr. Collins starts to offer his highhanded advice,Amanda decides to literally lowball him on the spot:


A Post Modern Dip in the Pond: Amanda and Mr.Darcy do declare their love and she asks him to recreate a certain Colin Firth moment, in which he obliges her greatly. Hate to say it,but he does give that previous Darcy a run for his money here: 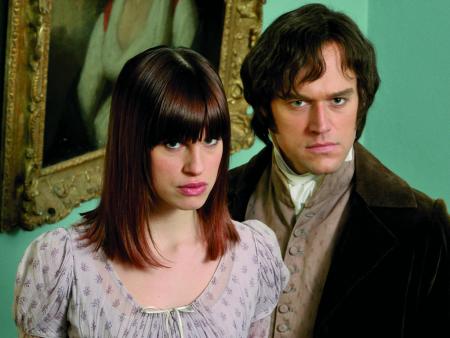 Amanda and Mr.Darcy enter the real world: Due to a serious injury to Mr.Bennet, the need to bring Elizabeth back is more imperative than ever and as Amanda is finally able to return home,she discovers along the way that she didn't come back alone.

His stunned expression at the future of London is amazing as well as understandable,not to mention a wonderful opportunity to reaffirm his love:


When Darcy met Lizzy: Amanda does bring together Elizabeth Bennet and Mr. Darcy in time to return to their fictional world but not without a fight put up by her lout of a boyfriend. Whatever first impression Darcy made upon Lizzy at that moment, I do think she was rather impressed by the way he defended himself by not having to lift a finger to do so:


If you haven't seen this marvelous miniseries yet, I strongly urge any P&P fan to do so,post haste! There are loads of fun surprises from the Austen characters we all believe that we know all too well and a lovely romance between our modern heroine and her old fashioned hero. To round this recap off, here is a scene not available on the US version that features Miss Price singing for her supper at the behest of Caroline Bingley and it's quite the unexpected number to be sure. A perfect way to enjoy Austen,with laughter and song: