Heading back toward familiar fear territory, our look at the Nightmare on Elm Street series takes us to Part Two, Freddy's Revenge (what revenge that is exactly is never really discussed in the film, which makes me think it was a title without a story for some time) released in 1985, a year after the original NOES hit it big on the horror scene.

Wes Craven was not on board for this one, feeling that the first NOES was a "one and done" deal, plus the script for Part Two broke a lot of the rules of logic set down for the characters to follow (which I will get into more detail soon). New Line, however, saw the chance to create a cash cow with Freddy and went ahead with director Jack Sholder at the horror helm.

The story here centers around Jesse (Mark Patton), whose family got a financial bargain by buying Nancy's old house. But that place does have it's drawbacks; like being so hot, that one of the family pet parakeets goes insane and pulls a When Animals Attack on them (it's more stupid than scary) before it explodes. I kid you not, the bird blows up and all the dad can think to say about is to accuse Jesse of stuffing a firecracker into the poor thing!

While Jesse tries to bond with jock classmate Grady and girl next door Lisa (played by Kim Myers, who has the look of a young Meryl Streep), he faces some freakish dreams about our good friend Freddy, who wants him to take up the mantle of the finger knives for some slash and dash fun: 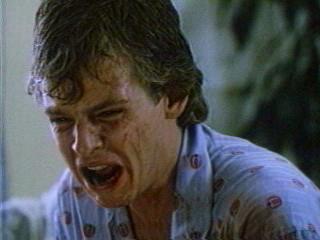 Freddy's Revenge is mostly a possession film, with Freddy taking over Jesse at times to commit murder in the real world (something that Craven was strongly opposed to).

Since the victims weren't asleep, and it's not clear if Jesse was dreaming or just in a trance, that set-up tends to undercut the whole point of the villain as a killer who strikes at you only in your dreams.

Not to mention that in this version, Freddy has fire element powers that cause flames to erupt on command, as well as raise the room temperature.  Also, bringing Freddy out into the real world was established in the first film as a way to weaken him for a defeat, not to make him more of a threat. A lot of shameless rule breaking going on here which only serves to undermine the true horror of its Big Bad and makes for a mess of a movie:

Despite it's flaws, NOES2 does deserve some credit for setting in place certain plot fixtures that were carried onward into the series.

Making Nancy's house a focal point for Freddy was picked up again for the third film, subtitled Dream Warriors, and continued throughout the rest of the series, even down to Freddy Vs. Jason (a nifty little line from Freddy comments on that in FVJ). The idea of Freddy using a new person to connect him to future prey was better developed in the third movie and formed a trilogy of sorts in the series, which I call The Dream Team, and are my favorites in the whole NOES saga.

Also, the organic look of the finger blade glove, which grows out of Jesse's hand during a key transformation scene, was used for Wes Craven's New Nightmare. Most importantly, it cements the pattern of a woman being the one to ultimately defeat Freddy, as Lisa plays the part of exorcist in driving the dark spirit of Kruger out of Jesse by declaring her love (an early version of Xander in the sixth season of Buffy saving the world from the wrath of Dark Willow by offering his unyielding affection for her crayon breaky self, if you will):

What truly makes this sad sequel stand out, apart from the two memorable Freddy lines "You've got the body, I've got the brain!" and "You are all my children now!", is the gay subtext of the film.

With the screenwriter, David Chaskin, now acknowledging that was his intention all along, and the film's leading man being openly gay, this metaphor for the emotional complications of a teenager struggling with his sexual identity has earned NOES2 cult film status. Considering that this movie was made during the 1980s, when these issues were barely being dealt with constructively in the mainstream media, having this particular theme fly under the radar here was a nifty act of social rebellion.

I do recall seeing this movie in theaters (the poster art intrigued me) and still find it hard to believe that the director had no clue whatsoever about this particular theme, especially in the sequence where the gym coach gets slaughtered in the locker room showers after meeting Jesse at a leather bar.  Be that as it may, NOES 2 may have not been the best follow-up film, but it did offer some merits that contributed to the rest of the series:


Tune in next time,when Wes Craven returns to revive his dream monster man in Dream Warriors and if you haven't seen Freddy's Revenge,do check it out. It's far from my favorite film in the NOES saga but one thing you can say in it's favor is that it certainly gives you something to talk about:

Let me state now that you are basically my hero for covering so many horror films, and for this one, in particular. Kudos!

On to the nitty-gritty. This movie mostly sucks, although it does set up some of the franchise's traits, as you stated. I would mostly note, tho, that the "girl stops evil" aspect has been around since Halloween and Friday the 13th before it, so it's really more that aNoES 2 decided to make that trope official.

There are a couple of nicely-moody scenes, and I like the idea of following up on Nancy's house, but with new characters. (aNoES 3's use of the house was exceptional, btw) The standout for me, though, is when the lead is playing around in his room when an unannounced girl comes over.

Oh my god, not only does the kid look totally stupid, he does this thing where he pops some kind of confetti-type thing right in front of his crotch - just as the girl and his mom come into the room! That moment was so lame/embarrassing, and so terribly, terribly 80s.

In closing, let me add this: I really miss the fact that all of the 80's-90's Friday and Nightmare films had something that made each one worth watching. It astounds me that I kind of liked Saw 1 and really enjoyed Final Destination - only to find the sequels to be completely devoid of effort or quality. I think I've seen 2 sequels for both Saw and FD, and they made it clear that I should've not even bothered to venture beyond those first installments...

Thanks,Thaddeus-I agree,the Final Girl trope was started much sooner but I would submit that NOES has been most consistent when it comes to gender as to who it is that takes Freddy down(not an expert on the Halloween or Friday the 13 series but I think they go 50-50 on that trope).

Yeah,that dance scene is notoriously bad,especially when he puts on that goofy hat and shades! If you haven't the documentary Never Sleep Again(which covers the whole Freddy franchise),you must since they talk a good deal about this particular installment!

I also liked the first Saw movie(and even the second)and checked out FD,plus those Paranormal Activity flicks but all of them have run their course here.

Have you seen the VHS films? Those are nice throwbacks to old school horror anthologies with some excellently creative scares.