A Kill Bill moment on Game of Thrones,Marvel's Agents of S.H.I.E.L.D. reset the game and a truly scary Kitchen Nightmares 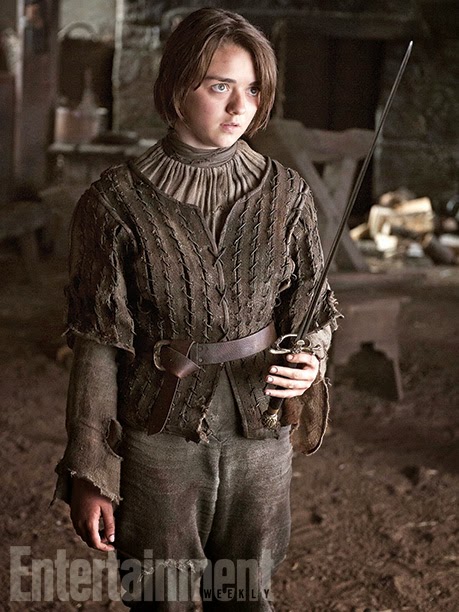 The fourth season of Game of Thrones set up a number of new plot points,particularly in King's Landing where the wedding of Joffery and Margery is set to take place very soon and Jamie is being made to feel like an unwanted guest by just about every member of his family.

Other developing details include Jon Snow facing up to his commanders in the Night's Watch for his time as a wildling and Dany preparing to conquer yet another city in order to free their slaves. However, the stand out moment of the night belongs to Arya as she got a juicy taste of revenge.

During her travels with the Hound(who hopes to get money from her wacky aunt in the Vale upon delivery), Arya ran into one of the men from Harranhal who captured her group of intended initiates heading for the Wall,the very man that took her sword Needle and killed one of her friends.

Well,during that rest stop, The Hound got into with that fella and his merry band of cutthroats and during the fight that ensued, Arya seized her chance for payback and got it in full,not to mention Needle back. As one of the few remaining Starks out there, Arya certainly has the true ice of her warrior clan's bloodline flowing through her veins and woe to those willing to underestimate this deadly daddy's girl( rather gory stuff ahead, you have been warned!):

So,while there is plenty to anticipate this season, King's Landing is going to become awfully important this time around and while I won't give anything away, do keep an eye on those wedding preparations,folks.

Some might think it's good to be a Lannister but trust me when I say that a whole flock of angry chickens are coming home to roost,along with ravens bearing some ill tidings indeed:

Some serious flipping of the script happened on Marvel's Agents of S.H.I.E.L.D. this week and while it may not have been a big surprise who the Clairvoyant was(what are special guest stars for, after all?), discovering who was truly on his side most certainly was!

Most of these new plot points are due to the new Captain America movie(nice way to keep the continuity going,people!) and I do hope at some point, some of these characters make their way onto the silver screen because they definitely deserve it. Melinda May having to confess to Coulson about her orders to watch him for any possible signs of deterioration due to his time in "Tahiti" was a solid bit of acting there and the whole "Hydra is attacking from inside S.H.I.E.L.D" deal should play out rather strongly for the remainder of the season:

I hate to say "I told you so" but it's hard not to gloat a little as those who have been disgruntled with the show are now starting to see the bigger picture and climbing happily on board(so season six Buffy there!).

When it comes to a Whedon series, you must trust Joss or his designated appointees because it will be worth the wait! Next week, the new MAOS episode will be playing after an encore of this one and basking in the glory of the Marvel goodness should make for a lively Tuesday(not something you'd ever think would happen and yet there it is):

Last week, I watched the previous season's finale of Kitchen Nightmares, where Gordon Ramsey did something that he rarely does on this show; give up before he even starts a makeover for a troubled restaurant.

It's hard to blame him,since the husband and wife owners of Amy's Baking Company are so over the top wacky in their behavior that even Dr. Phil(whose show they appeared on this week) had a hard time talking sense to them.

The internet outrage that followed this episode has been just as gonzo as these two owners,who scream,argue and deny any wrongdoing for their food failures and bad employee/customer relations, and has prompted the show to start their second season with a two hour special about this chaotic couple:


While I don't think that harassing these people is the way to go here(simply staying away from their restaurant would be more effective), part of the problem is that they themselves are courting the bad publicity by constantly reacting to the internet and making public appearances to complain about how all the "haters" are out to get them. Maybe if you spent that energy on improving your business instead of chasing the back end of the PR train,everyone would be better served.

I've watched both the US and the UK Kitchen Nightmares and there have been some outrageous folks on either side of the pond but Amy's Baking Company really takes the cake. Why people who do agree to be on a show like this act up is beyond me-hello, YOU asked him to come and help you out, not the other way around! If things are so great, why did you contact KN in the first place?

Will I watch the KN opener tomorrow? *sigh* yes*hangs head in shame*-I'm a sucker for such shenanigans, folks but hey,give me credit for admitting it:

HELL'S KITCHEN: Ramsey does a double shift as the latest season of HK is under way with a wedding challenge set for tonight. The man's blood pressure must be skyrocketing, I swear!:

I must say, I stopped watching the show, but continued to read recaps on a site I frequent. I was very very happy to see the grades improve, and the comments by the reviewer really made me pleased that there was some sort of pay-off down the line.

I just wish they had gotten there sooner and shown a better ability to craft good stories and to make their characters compelling. But, hell, every Joss Whedon series has had a bit of a slow start, and I guess these guys found their footing a little faster than Dollhouse - although Dollhouse itself did a better job with its characters from the get-go, its stories were a very mixed bag.