The Year of Freddy Fear gets tangled up in The Mangler

Our salute to the Nightmare on Elm Street film franchise and it's monstrous main man Robert Englund,aka The Year of Freddy Fear, takes a step back from Elm Street this month to check out another one of Englund's horror flicks,this time based on a short story by Stephen King.

The Mangler came out in 1995 but didn't set up shop for long. Englund played one of the villains of this piece and his name was one of the big head line attractions for this film. In addition to Stephen King(who had no say in this pathetic production), Tobe Hooper was on board as director and as a horror fan, you might reasonably,"Hmm, three top names in the business,should be a good show!" 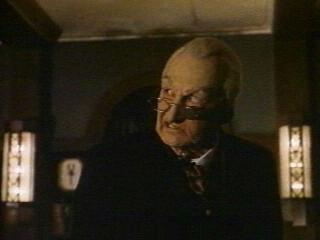 Well,that is far from the case here. The basic plot line has the title machine,which is a central piece of equipment for a laundry service in Maine, being demonically possessed and literally running folks thru the ringer.

Englund plays William Garvey, the owner of the Blue Ribbon Laundry,who goes around wearing an old fashioned three piece suit complete with leg braces(due to a much hinted at injury from the mangler) and when he's not having verbal stand-offs with either his workers or reluctantly nosy police detective John Hunton(played by a rather bored looking Ted Levine),he's leering at one of his female employees in a manner that Human Resources would not approve of.

Hunton and his goofy brother-in-law who happens to be a college professor that studies mythologies figure out that the mangler has a extra special demon attachment and make plans to perform an exorcism(they do a warm-up one on an old fridge that came in contact with the mangler and yes, that does sound way too convenient for story telling purposes there).

Garvey,meanwhile, has some scheme to sacrifice his virgin niece to the mangler with the assistance of  his harassment suit waiting to happen worker who is suddenly his hench woman! Yep, a lot of movie making mess is going on and trust me when I say that the nicest word I can think of to describe the experience of watching this film is wretched: I don't have a lot of clips from this film to showcase,as it's far easier to find videos of people talking about The Mangler than actual scenes from the movie and believe me, that is a small mercy.

However, there are a few things we can chat about here such as why are there so many terrible adaptations of Stephen King short stories like this? That is due to a number of them from King's first anthology,Night Shift, having been brought up in the early 1980s by a film producer who intended to make a Twilight Zone type of TV series with them but wound up selling them off  instead to who ever wanted to make a quick buck from a horror movie with King's name plastered all over it.

Yes, King has made a movie from one of the stories in Night Shift,the incredibly wacky Maximum Overdrive, and does allow student filmmakers to make short features from this book for the low rate of one dollar from time to time but the majority of the adaptations from this collection were never meant to be feature films.

One movie that King did manage to get his name taken off of was 1992's The Lawnmower Man,which basically cut and paste the bare minimum from the original source material to pass off their virtual reality Frankenstein meets Charley script as a King project(the movie's not bad but it was right to remove King's name from it).

Most of the Night Shift stories would work as part of a Tales from the Darkside kind of show and many of them are good,creepy reads. However, this is an object lesson about being careful who to sell your media rights to,hopeful young authors out there. Don't just grab the first handful of cash offered to you or part of your literary legacy could include a ton of unintended sequels moldering away in a DVD bargain bin. The Children of the Corn movies alone are plentiful enough to fertilize the entire state of Iowa's farm lands:

Believe it or not, there are two follow-ups to The Mangler,particularly since the first film crashed and burned at the box office. Then again, they were direct to video releases,which explains it all too well.

The Mangler 2 actually has no true relation to the first film,much like The Lawnmower Man, in that the "mangler" here is a computer virus that takes over a rich kid's boarding school. The Mangler Reborn claims to be more in line with the original story but it's simply about a repairman who buys what's left of the laundry machine and starts feeding it blood.

I have no intention of watching either one of these bad boys and while there are a couple of other Robert Englund non-Freddy films on my list for later this year, I'm hoping that this is the worst one out of that lot:


Then again, I may have spoken too soon as August has The Year of Freddy Fear team up with Bad Movie Month's Sorry Sequels selection with Freddy's Dead: The Final Nightmare(why is it that when the word "final" pops up in a horror movie title, chances are that it's never really the last one in a series?).  Until then, stay cool and get your King on with Under The Dome(trust me, even the weirdest episode of that show is far better than The Mangler):

This movie has a few good moments of building a nice horror atmosphere, but the budget and some scripting and pacing issues keep it from being very interesting, for me, anyway.

It very much is like Christine, but with a possible commentary on industrialism. That element doesn't play enough in the film.

Levine made me laugh a lot in this film though, I'd never heard his voice before, and it always sounded as if the sound guy was distorting his voice while he spoke. Levine is nature's Bane!