I joined in a reading challenge this past week,the Fright Fall Read-a-thon held by Seasons of Reading, whose main requirement was to read at least one scary book from either the horror or mystery genre.

I went with horror and decided to experience a blast from my literary past with Christine by Stephen King. This was my first official Stephen King novel to read,having experienced his work up till then through film adaptations such as The Shining and Carrie.

The paperback copy that I picked up back in 1983 had a movie tie-in cover(which,sadly, I had to replace) and the store that I got it from was right next door to the movie theater where I also saw director John Carpenter's  cinematic interpretation of this killer car story. More about the movie later,let's get to the page turning.

Christine is the name of the custom painted red and white 1958 Plymouth Fury that sad sack high school senior Arnie Cunningham spots one day,riding along with his football star buddy Dennis Guilder, and instantly falls in love with the battered old wreck that's for sale.

Pretty much everyone in Arnie's small social circle tries to talk him out of buying the car,particularly his domineering mother Regina, but this car is the one thing that Arnie refuses to back down on.

The real trouble is that the car has some nasty vibes attached to it,courtesy of it's former owner Roland LeBay,who dies not long after the sale is completed. LeBay's vicious nature was only enhanced by his unwavering devotion to Christine, a car he insisted on keeping even after his wife and daughter died within it.

At first, Arnie's appearance seems to improve along with Christine's and he even manages to have a girlfriend, Leigh Cabot. However, the other woman in the picture is a jealous as well as vindictive lover and soon enough, many of Arnie's rivals become roadkill. Unfortunately, the list of friends and enemies soon blurs, with Arnie' very soul and sanity hanging in the balance.

Many people have called Christine "Carrie for guys" and to some extent, that is a fair comparison. However, being a teenage girl at the time I first read the book, I can tell you that it was just as easy for me to identify with Arnie Cunningham as it was to Carrie White.

In a few ways, I could connect a little more to Arnie, being a nerdy type with intellectual interests that teachers appreciated but my peers did not. I wasn't as lucky as Arnie to have a friend who would back him up during assaults by school bullies(and yes, girls can get as physical with each other as boys when it comes to that) but also fortunate that my vulnerabilities didn't lead me to an unhealthy obsession like it did for him: 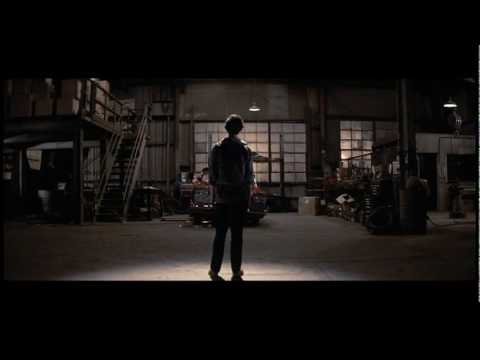 In rereading Christine, I did find that some elements of the book still hold true today. Arnie's overly ambitious parents, the social hierarchy of teens and just how attached some lonely people get to inanimate objects.

Granted, I'm not a car person(then or now) but the personal joy that a person with not much of an outside life can have for something like porcelain figurines, vinyl records or rare comic books can become a welcome substitute.

Many times, it leads to finding a strong passion that brings about a better and more fulfilling life yet there are those who get sucked into a sinking spiral that they just can't get out of and Arnie is the poster boy for that particular pitfall. Like any poor soul tempted by the dark side, he's way in over his head before long and a bit too enticed by the demonic entity in his path to notice:

While the film adaptation strips down most of the sub plots in the book(which makes for a better movie,in my opinion) and has Christine as the ultimate source of evil(in the book, Roland LeBay's twisted spirit was the driving force,so to speak), both versions touch strongly upon the emotional violence that's powerfully present here.

A good portion of the book is told from Dennis' perspective and while Christine is a feature figure in his nightmares, the transformation of his good natured best friend into a cold and callous stranger is the true horror facing him. They've been best friends since childhood and memories of those more innocent times are what haunt Dennis the most.

Arnie's romance with Leigh also takes a deadly turn yet the real impact of what is happening to Arnie is more keenly felt by Dennis,who knows him better than anyone.  It doesn't take an evil car to break up most childhood friendships yet regardless of the supernatural setting, the slow motion destruction of Arnie and Dennis' relationship is very relatable and a true thread that runs down deep into the seam of the story:

I know that many fans think that Christine is a straight out clunker and while I would agree that's overwritten in many parts, the book does have some merits. You could argue that Christine is a possession story, with the demon(be it LeBay or his car) sadly winning out in the end.

Both the book and film leave open the possibility that this particular type of monster could be released yet again, which is not as remote or such a sequel step stone as it seems. We still have lonely and troubled souls among us who are tempted by numerous shiny trinkets that are pure poison one way or another. If anything, Christine can be seen as a cautionary tale of looking for folks like that or at least pointing them in a better direction.

I thank my fellow readers in the Fright Fall Read-a-thon and Seasons of Reading for giving me a great excuse to get behind the sinister wheel  of this mean machine once more and do recommend giving the book(and the film) a shot, if you haven't before. Christine does have some thrills to offer even if you take the long way around:

Christine...definitely a blast from the past! I think I read it when I was at least in junior high. I can't even remember!

Thanks for joining me for the read-a-thon. I hope you enjoyed it!