Leonard Nimoy, your legacy will live long and prosper

One of our best pop culture icons left us last week. Leonard Nimoy, known to millions the world over as Mr. Spock, the half human,half Vulcan second in command(and later captain of his own ship) to James T. Kirk on Star Trek passed away at the age of 83.

Despite that character's seemingly cold and logical nature, Mr, Spock was and is one of the most beloved figures in the Star Trek universe due to his mix of cool calm and surprising moments of warmth.

Nimoy did more in his career than be Spock but over time, he eventually embraced the fan love that this three season sci-fi show and major motion picture versions gave him. Titling his first memoir "I Am Not Spock" and his later one "I Am Spock" speaks volumes about his approach to being such a pop culture phenomenon.

Nimoy was doing both theater and television when the role of Mr. Spock came about(he actually turned down a run of Fiddler on the Roof to take the job) and despite the network's reluctance to accept his character having those pointy ears, he caught on fast with the audience. The chemistry between Nimoy and William Shatner(a friendly rival at best) helped to enhance the over the top antics that pitted the two of them against each other on screen: 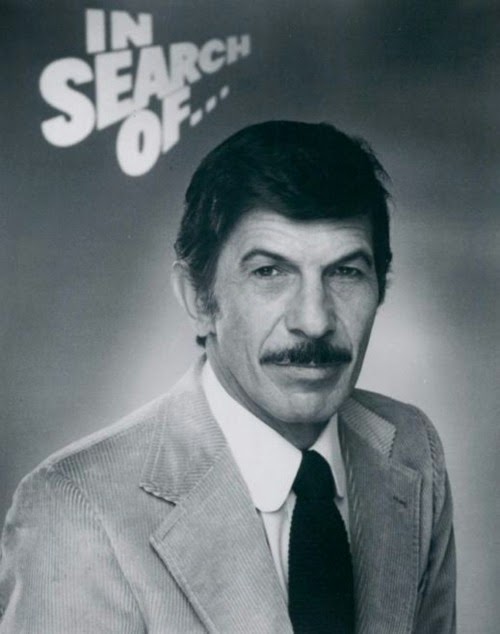 Nimoy did plenty of other TV roles such as a brief stint on Mission: Impossible, episodes of Night Gallery and Columbo and the host of the series In Search Of..., a show I fondly recall watching with my family.

In Search Of was along the lines of Ripley's Believe It or Not!(nowadays, equivalent to Mythbusters), the type of show where for an hour you looked into Bigfoot sightings or alien abductions, mysteries of the ancient pyramids, that sort of thing.

Hokey, but Nimoy's succinct demeanor added some credence to the content and made it worth watching once a week. You can find full episodes online, so I highly recommend checking one out.

He also tackled more dramatic roles, such as the husband of Golda Meir in the 1982 miniseries A Woman Called Golda,(starring Ingrid Bergman) which earned him an Emmy nomination:

Nimoy had quite a diverse career in the arts. He was a published poet, photographer and singer( his "Ballad of Bilbo Baggins" is too fun not to listen to) and film director.

He not only directed two of the Star Trek films, he also was behind the camera for Three Men and a Baby and The Good Mother. His other works include appearances on the series Fringe and voice work for The Simpsons, Furturama and The Big Bang Theory, where he did the voice of action figure Spock, one of the few beings that Sheldon Cooper feels is superior to himself:

Leonard Nimoy was not just an actor, he was an emotional touchstone for many people. Whether on or off screen, his good nature was felt and appreciated.

Unlike some who have a love-hate affair with the role that made him or her famous, he seemed to cherish the responsibility given to him by being Spock. A fitting tribute to his legacy is how well he passed the torch to another actor(Zachary Quinto) in the rebooted Star Trek films. That he had the class and humility to be a supporting player in this new take on that universe shows you the caliber of the man he was.

Fare thee well, Leonard Nimoy. Chances are that it will be some time before we see your like again in the pop culture universe:

Wow, this is a thoughtful and loving tribute, lady t! I never saw In Search Of or The Good Mother, but classic Star Trek was always something me and my siblings used to watch on weekends - and all of the movies, from 3 through 8, in the theater.

He was classy, kind, genuinely artistic outside of his acting career. I smiled every time I saw him. And I wish he was still alive and healthy.

Thanks,Thaddeus-I wish he was still here too but he's on a new adventure(that's how I like to think of it)to explore other worlds beyond this one and a most fitting ambassador for humanity can not be found,imo.