Getting prepared for the Ross Poldark Blog Tour this summer!

For many of us historical fiction fans, the latest PBS Masterpiece series Poldark is truly a refreshing breath of entertaining air for our summer TV viewing season.

To add onto the fun, the folks at Sourcebooks(who are publishing the Winston Graham novels upon which the show is based) is having a special blog tour, starting on Monday July 6 and ending in early August. Reviews, previews and highlights about the literary version of Poldark will be featured, along with the chance to win a very particular prize pack(more about that later).

I am happy to report that Living Read Girl will be on two of the stops for this delightful tour, with reviews of the first two books. I am at this moment reading Ross Poldark, the one that starts it all and so far, it's quite a page turner.

We are introduced to our leading man as he returns home after a stint in the army that brought him into the American Revolutionary war. Upon arriving back in his Cornish hometown, Ross discovers that his former life has become just as much of a disaster as the battlefields he left behind.

With his father dead, the family estate in ruins and household in disrepair, plus Elizabeth, the woman he loves, about to marry his cousin Francis, Ross has little reason to remain in the neighborhood. Nonetheless, he is not about to simply turn tail and run away from his problems.

Instead, he undertakes a reopening of a copper mine and sets about to restore his family name and holdings, taking a young woman named Demelza under his wing(and perhaps into his heart) along the way:

My full review of Ross Poldark will be up on July 14 and by the 25th, my write-up of Book Two, Demelza, will be ready as well.

Demelza is a rather intriguing character, as she starts out as the roughly treated daughter of a miner who takes her chances as a kitchen maid in the Poldark household. Her ill ease with so-called "refined society" makes her transition from servant to lady of the manor all the more challenging.

Nevertheless, she is more than capable of  her new found responsibilities, especially when a tragic clash between Ross and his greatest rival George Warleggan threatens to tear the entire neighborhood asunder. As Demelza is such an engagingly forthright person who seems to be the perfect match for Ross, watching her take command should be a true treat to read: 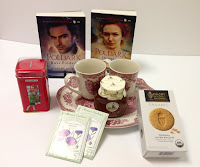 During the tour, there will three chances to win some nifty prizes such as paperback editions of Ross Poldark and Demelza, along with a grand prize pack that includes a tea and cookie set with a pair of lovely mugs and serving plate.

To enter, just leave a comment at any of the blog stops(starting on July 6 and ending August 3) when they put up their Poldark posts and the winners will be announced at Buzz on Sourcbooks' blog by August 13th.

Well, I know that my Independence Day weekend will be complete with both the book and TV version of Poldark to enjoy here and I am in no doubt that my pleasure is well shared amongst lovely like-minded others out there. Have a happy holiday and do drop in later this month for some pleasant Poldark thoughts: