As the Force Awakens, should we have New Hope for Star Wars VIII?

The big pop culture event this week is the release of the first major trailer for Star Wars: The Force Awakens, set to arrive in theaters on December 18.

Already advance ticket sales have gone through the roof, hell, they've shattered several ceilings with predictions that this film will launch a whole new era in fan history. While I want to believe that TFA is a sign of good things to come, I can't help but to insist that we proceed with a little bit of caution here.

Don't get me wrong, I do like Star Wars(original trilogy, that is) and this new trailer certainly looks promising, especially since we have some fresh faces as our main characters and old school favorites like Han Solo, Chewbacca and Princess Leia on board as well. Luke Skywalker is not really seen here but that doesn't mean he's not present(my hunch has to do with a mysterious masked figure who claims,"I will finish what you started..." then cut to a melted version of Darth Vader's mask. Has the son taken up the way of the father?).

All in all, this does appear to be quality sci-fi fantasy fare and having J.J. Abrams at the helm is another sure sign that this new step forward for the Star Wars saga could be a ride worth taking:

However, like the song says, "don't get fooled again!" as many of us greeted the Star Wars prequels with the same hopeful spirit and were tossed into pits of utter despair at the utterly awful results.

All three of those movies, Phantom Menace, Attack of the Clones and in particular, Revenge of the Sith, were needless back story that had only one good fight scene worth watching. Yes, they may have had a few fun moments but those were very brief indeed.

There are so many targets of derision to be found in the prequels, from Hayden Christenson's wooden acting that even managed to stifle his co-stars to plot holes that you could fly a Millennium Falcon through(yep, just erase those droids' memories, why not?) but the one truly worst thing about those movies that everyone agrees on is the introduction of Jar-Jar Binks, a character who we all simply hate, there is no love: 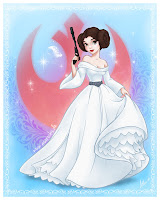 With any luck, that won't be the case here yet we do have to be concerned about the influence of Disney, who now owns the Star Wars franchise. One thing that both George Lucas and Disney have in common is the ability to mass market their creative properties to the hilt and you could almost say they're natural multimedia allies.

However, it is rather odd that ABC's Monday Night Football was the chosen on-air platform for the first full trailer to be showcased in and yes, sports fans can enjoy Star Wars,too but there are certainly other more fan friendly shows that this could have been aired during.

While I don't think Disney will deliberately try to tweak Star Wars into something that it's not in order to  fit into their mouse shaped template of perceived profit, sometimes a too warm of a welcome is just as disruptive:

Despite my doubts, I do believe that this new Star Wars could be a great boost to not only it's established franchise but to the wider genre realm of science fiction/fantasy within the mainstream.

And to those idiots trying to stir up trouble by claiming this film is "anti-white," and that an African American storm trooper is a bad idea, you all need to SHUT THE HELL UP. NOW. Considering the legacy of stereotyping to be found in the Star Wars universe alone, that nonsense needs to be shut down right quick, troll or no troll.

Anyway, I'm more than willing to give Star Wars VIII a fair chance and with any luck, the faith of the fans will be amply rewarded. After all, when it comes to Hollywood and sequels, things could be infinitely worse and usually are. At least we don't have to worry about having two Chewbaccas in a new Death Star(I hope!):