When the first trailer for CBS' Supergirl hit the pop culture radar, I was one of those who expressed serious doubts concerning the seemingly romcom vibe of the series,making one of the few female driven superhero shows turn into a camp fest.

However, in the interest of fairness(as well as positive buzz) I did watch the pilot episode this week and have to admit that maybe I sounded the alarm a little too soon. I'm not completely convinced about the show's good intentions but upon watching the pilot, am willing to see some merits here.

Mind you, a couple of the scenes that had me wincing in my seat(Cat Grant's defensive speech about using the term "girl" for one) are still there but the overall set-up of the series puts those moments in the minor spots that they deserve and focuses more on Kara's choice in stepping out as a superheroine.

What strongly sells the show is leading lady Melissa Benoit, who is easily believable as Kara Danvers, who arrived way too late to protect her younger cousin Kal-El(the time lapse is explained by Kara's ship getting rerouted into the Phantom Zone) and settles for living a normal life. However, with her cousin going great things for the world with his powers, she feels compelled to follow in his flying footsteps there.

Benoit does a nice take on the Clark Kent style of goofiness and glasses to conceal her alter ego, mainly because that's sort of who she really is. Also, her relationship with her adopted sister Alex(who sort of sabotages Kara in the beginning but comes around just in time to help her save the day) is clearly a supporting character pillar that the show plans to lean on often has the feel of a true sisterly connection, something that plays to both of their advantages in handling the first Big Bad in their path:

Speaking of family, it's a nice tip of the hat to cast Helen Slater and Dean Cain as Kara's adoptive parents but I hope that they get more than a brief cameo during this initial run.

While The Flash chose to have John Wesley Shipp(who played the Flash in the nineties and came on board this new version as Barry Allen's dad) depart from their current season rather quickly, they did make good use of him while he was there.

The pilot had a lot of setting up shop to do, as they went through Kara's origin story at a quick pace through the opening credits, giving us a Kara who is already integrated into society. That's a good place to start as we've seen the whole "newcomer to Earth" scenario more than enough times with Supergirl in live action fare. Making her a part of our world from the jump helps to establish more of a connection with the character rather than just have a powerhouse presence barreling down at us:

Another big plot arc that was put in place was having a pack of escaped criminals from the Phantom Zone(whose jail followed Kara's ship to Earth) preparing a major scheme against their current home world and targeting Kara, with their leader having a very personal connection to her.

That sounds like a fine place to start out but I do want to see some twists and turns with that narrative to keep things fresh. Since we have the same production team that made Arrow and The Flash work so well on the CW, there is a good chance that this won't become a stale formula that halts the show in it's tracks. 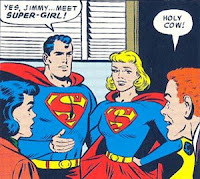 Meanwhile,  having Jimmy("James") Olsen work with Kara as a supportive ally and possible love interest is a solid check mark in the plus column.

Turning this traditional Superman "geez,whiz!" sidekick into a mature and yes, sexy, supporting player is the right note to take. Kara's buddy from work Winn is clearly meant to be more of a friend,even he doesn't know it yet, and it would be best for him to become the Xander to Kara's Buffy.

James and Kara do have sparks from the get-go and I'm pretty sure that I am not the only one to see the partnership potential between these two, romantic and otherwise:

Granted, this is only a pilot review and it'll take a few more episodes to convince me that my early fears weren't warranted but so far, Supergirl has made a good first impression in her debut outing.

Mind you, I'm not giving up on Gotham,despite the early demise of a promising villain, which means that I'll be keeping an eye on Kara and friends a day or two later than most regular viewers of the show. Still, if  the character development and the season long narrative continue to go up,up and away, I might place a certain super villain city in second place on my TV schedule. We shall see.

For now, if Supergirl is not hampered by network busybodies and is allowed to soar like her CW counterparts(not allowing crossovers is just ridiculous,people, really!), this maiden of steel could be the one to shatter some serious glass ceilings for other super women of fiction to be able to take the main media stage. That's a heavy burden but one that is worthy of Supergirl to take on: