Happy April Fool's Day,folks! This is the one and only holiday that I know of that is dedicated to sharing a good joke or two and believe you me, we could all use a hearty laugh right about now.

To that end, I've rounded up a few pop culture parody videos(and yes, there are all musical ones) for our mutual amusement. First up is an Epic Rap Battle of History bout between Marvel's current film favorite Deadpool and old school Star Wars assassin Boba Fett.

Personally, I never found Fett to be that interesting(or as cool looking as Darth Maul) but he does have a serious following and as for Deadpool, any mouthy merc that can get me to actually enjoy a Ryan Reynolds performance has my vote:

If they did actually met, Katniss and Hermoine would most likely be allies against evil rather than enemies of each other. Yet, it's fun to see the Mockingjay throw down with a major league witch: For something slightly different, the gang at AVbyte do a singalong salute to the glory of reading Goosebumps books, which came out around the same time that the GB movie was released.

I never read those books(did watch a few episodes of the TV show version) ,however, I did enjoy the far more illicit terrors of V.C Andrews , not to mention Jackie Collins, so I sort of can relate to the pleasures of back in the day fright fare: 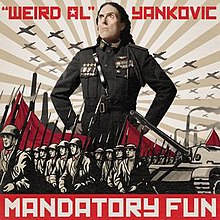 You really can't have a proper pop culture parody presentation without a little something something from Weird Al Yankovic, the now and forever reigning king of the genre.

Picking just one song from his last album,Mandatory Fun, was  difficult indeed but all signs seem to point towards his take on Lorde's "Royals", which is called "Foil", and who am I to argue with those supposedly hidden forces of fate?

It's not like he did a number about Cadbury creme eggs, which I understand have a sweetly sinister background there:


To close out this April Fool's Day celebration, I bring you Batlexander Manilton, which in all seriousness is an excellent blending of the Broadway sensation Hamilton with the legend of the Dark Knight. Hope you all have some moments of much needed mirth today and remember to keep a funny song in your heart: