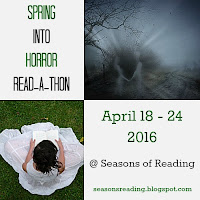 Joining in on Seasons of Reading's readathons has become a nice addition to my literary life,not to mention a fun challenge to give to myself. However, for the upcoming Spring Into Horror(which runs between April 19 through the 24th), I did have a bit of a problem in choosing what to read for that week.

Initially, I was going to do a reread of Stephen King's It, due to the news about a new adaptation being made for theatrical release. Not only will this version of It be divided into two films(one for the children's sections of the story, the other for their grown-up selves) but this will be an R rated script as well.

That alone should really be an eye opener to those who have only watched the 1990 made for TV miniseries,which I was truly surprised that they attempt to do at all back then. The miniseries format does suit the epic narrative of the book yet the subject matter alone was hard to depict in all of the novel's gruesome glory.

Since I have done Stephen King rereads for Spring Into Horror in the past (plus FrightFall), this felt like a good choice. However, thanks to Blogging for Books, I have the chance to review The Library at Mount Char by Scott Hawkins which is also suitable for this occasion.

The heroine of the novel is Carolyn, one of eleven children who were orphaned by a bizarre incident and adopted by the mysterious "Father" who assigns each of his protegees to maintain catalogs of human experiences in the title setting.

When Father up and vanishes one day, Carolyn and her fellow librarians are in search of him but not all of the librarians are eager to reclaim their leader. It's up to Carolyn,who goes back into the mortal world, to find out what has happened to Father or more than one realm of existence may be in danger of destruction.

I've heard a lot of things about this book and while most readers are not entirely sure what to make of it, they all agree that it's a worth while read:

"Well, what's your problem? Surely, you can read both!" Yes, but Stephen King's It happens to be an incredibly long book(my paperback edition is nearly 1100 pages) and with the story being such an immersive read, a much smaller novel like The Library at Mount Char(which is about 400 pages) could easily get ignored in the process.

However, there is another big Stephen King literary event coming up that allows me to have both a revisit and a new read. The third book in his Bill Hodges trilogy,End of Watch, is due out this June and with that in mind, I treated myself to hardcover editions of the first two books in the series.

Mr. Mercedes, I did read on loan from Booksfree and it's quite the trip. King gets to indulge his love of crime thrillers by creating Bill Hodges, a retired cop haunted by the last case that he never get to solve.

That vicious crime involved a stolen car being driven right into a crowd of waiting job applicants, killing several people and earning the unknown driver his mocking nickname. The killer sends Hodges a series of taunting letters, hoping to drive the former detective to suicide but instead he gives his enemy a reason to live.

Mr. Mercedes won the Edgar award last year for Best Novel in the mystery/thriller genre and it's proof positive that King could have easily become a big name in that artistic arena if his creative path had taken a different turn early on in his life. You could even say that Mr. Mercedes is much more terrifying than some of his recent ventures into horror because the villain of this story is all too true to life, especially these days:

The second book is called Finders Keepers and it begins with a legendary reclusive author of the J.D. Salinger/John Updike persuasion being attacked by a gang of robbers in his home. Turns out that the leader of the gang,Morris Bellamy, is more interested in taking the unpublished manuscripts of the writer than his money.

Many years later, the stash of stolen money and notebooks is found by Pete, a teenager who quickly understands the real value of what he's discovered. He intends to save the manuscripts for a later sale but that plan quickly goes awry.

Bellamy,recently released from prison for another crime, is not happy about his secret stash being claimed by another and goes off in hot pursuit of Pete and anyone else who gets in his way.  Pete asks Bill(along with his assistants Jerome and Holly)  to protect both him and the literary loot, which is more dangerous than either of them imagine. This sounds like a lot of page turning fun and I am so looking forward to this:


Since both of the Bill Hodges books combined are not as lengthy as It, that leaves plenty of room for me to explore The Library at Mount Char during Spring Into Horror week. Also, SITH is open to mysteries and thrillers, this all works out nicely. I think I'll save It for the FrightFall readathon later this year.

There's still plenty of time to sign up for Spring Into Horror(check out the link in the first paragraph of this post) if you would like to join in and I hope to see some new faces and blogs there. I'm happy to have this little book problem cleared up to make way for other reading dilemmas such as finding the perfect bookmark and making sure there's enough light to read by, no matter what location you're in-night lights are just not enough,sometimes!:

Love it. I think I am going to go with reading IT since I have never read it before though I have seen the movie. I am sure I won't be able to finish the book in that week but who knows. Good luck with your reads

Thanks,Autumn and good luck to you as well with It. You might find quite a few changes from the movie version there(no spoilers) but that book is a great read on it's own merits.