Springing Into Horror by entering The Library at Mount Char with Mr. Mercedes hot on my heels

Today is the opening chapter for Seasons of Reading's Spring Into Horror readathon, which will encourage as much page turning terror as it's participants can take until this upcoming Sunday.

You are allowed to read from genres other than horror(mysteries,thrillers,etc) and the first book on my terrifying TBR pile does cross more than one creative borderline here. The Library at Mount Char by Scott Hawkins follows a group of unusual acolytes, young people raised to catalog the arcane collection of worldly knowledge by the mysterious Father, who are now adrift due to the disappearance of their god-like master.

The leading lady of this debut novel is Carolyn, whose field of study is languages,including non-human ones, and she is tapped to enter the mortal world not only in search of Father but other items deemed necessary to appease other allies. She's not thrilled about how things are going, particularly with the brutal Michael, whose expertise is war, in charge.

I'm in the early sections of the book but so far, the one element that promises to be the undoing of them all is their lack of comprehension about how things truly work. Despite the seemingly infinite amount of knowledge that Carolyn and her fellow Librarians possess, they have no understanding of what their ultimate purpose is or how to adjust to this new change in their lives. Knowing and understanding are two very different things, as Carolyn is about to discover for herself:

Also, I'm doing a reread of Stephen King's Mr. Mercedes(which will be followed by reading for the first time his follow-up to that,Finders,Keepers). This book is more of a pulp fiction thriller, more along the lines of Joyland than Misery in terms of real world terror.

While it does have ripped from the headlines/crime novel vibe to it, Mr. Mercedes is a prime example of Stephen King's  original style of writing from the sardonic pop culture references(leading man Bill Hodges' take on daytime TV is scathingly acute ) to the deep dark depths of character development in both retired cop Hodges and his nemesis Brady Hartfield,aka the Mercedes Killer.

Like most Big Bads, Brady is very much different in age and circumstance than his arch rival but both share a determination to outdo the other before it's too late. Brady's twisted American Psycho-esque  persona may fit the modern day profile of a spree killer but his first letter to Bill Hodges is a sinister villain rant that's down right classic:

Later this week, Seasons of Reading will put up the list of prizes for this readathon and I'm happy to say that one of them will be one of my e-books. I will be offering coupon codes for my Jane Austen monster mash-up, Fanny Price: Slayer of Vampires, that will grant a free download of to at least three winners from Smashwords.

As the title suggests, this is a darkly humorous look at Mansfield Park told through letters that Fanny addresses to her brother William in the Navy yet never manages to send. Not even her beloved Edmund is let in on her suspicions regarding the newest members of their social circle, Henry and Mary Crawford, who have fangs just as sharp as their wits.

A modern day descendant discovers the many stashes of this most chilling correspondence during a house cleaning and hopes to turn this into a trendy vampire flick,hopefully starring his favorite actress Angelina Jolie.  Most of the book follows Fanny as she realizes the true danger that the Crawfords are to the Bertram family and her reluctant call to action against this pair of bloodsucking siblings. 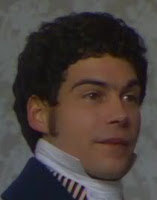 The book is also available at Barnes & Noble and iTunes, with an excerpt that Austenprose featured in a special Halloween post that you can check out here. Part of my inspiration for this book was my strong feeling that Henry Crawford(as well as his sister Mary) are more suited to be  made over into vampires than other Austen heroes and heroines are.

Their immediate power and influence over nearly everyone they meet, especially Henry and the two Bertam sisters, does seem to be rather supernatural and no doubt, plenty of Henry Crawford fans would be extremely delighted to let him take a bite or two out of them:


This should a fun and frightful week of reading for us all and if you're also signed up for Spring Into Horror, please feel free to share what you will be reading as well. One of the best parts of a readathon is seeing what everyone else is getting their literary goosebumps from,especially if you are looking for future fearful reads:

So glad to have you with us for another read-a-thon, Tara. Both of the books you're reading are on my (huge) TBR list. I own Mr. Mercedes, but still need to get my hands on Mount Char (what a title!).

Thanks again for donating copies of your book for prizes. You rock!