Shaking my head at a sorry slate of summer shows

With the regular TV season behind us, looking forward to the limited series that summer has to offer can be quite a hit or miss affair. So far, all I'm seeing is miss.

Sure, we still have Game of Thrones, Preacher and Outlander on but those series will finish their runs most likely before July 4th and frankly, the options for new programming just don't look that promising to me. Here's a handful of upcoming summer shows that I find myself shrugging at:

BRAIN DEAD: This about to begin CBS show stars Mary Elizabeth Winstead as Laurel,a  newly hired Capitol Hill staff member who discovers that her bosses are having their brains eaten by space bugs(not kidding at all on that one). The tone of this series appears to be dark comedy mixed with political thriller, which can work well in the right circumstances but this take seems to be as wobbly as Laurel is on her high heels.

Since this series was put together by the folks who created The Good Wife,it's not surprising that this is some sort of a sci-fi political satire. Only trouble is, the political wackiness that's currently going on in the real world right now makes this premise actually look like a welcome alternative rather that a stinging indictment of government game playing:

WRECKED: This TBS comedy follows a group of passengers and staff who survive an airplane crash and have to learn to make do on a deserted island. I suppose it's a twisted take on Lost as well as Gilligan's Island but the humor, even in the promos, feels very forced indeed.

While they do have a few good comedians in cast such as Rhys Darby and Zach Cregger, that's not enough to make a weak premise stretch out long enough for several episodes. We've seen this type of set-up in numerous comedy skits but I truly don't believe that this is going to be any better than those SNL bits that don't know when to quit:

DEAD OF SUMMER: The former ABC Family, which now calls itself Freeform, has a new aimed at teens series that takes place at a summer camp in the 1980s. And what usually happens to teenagers at such a remote location in that time period?

Yes, it's slasher time! I'm sorry but even the younger than me audience who this is targeted for can catch on to the cliches of this story line pretty quickly. I know that MTV is doing well enough with their adaptation of the Scream movies to give it a second season(which is probably why this show got greenlit) but can't we offer this section of  viewers something a little less derivative?:

MATCH GAME: As much as I like the idea of ABC reviving classic game shows like The 100,000 Pyramid, To Tell The Truth as well as setting up Celebrity Family Feud, why did they have to ruin Match Game by hiring Alex Baldwin as the host?

That guy is obnoxious personified, to the point where he is no longer simply being a caricature of a pompous creep but just being himself. With all of the good comedians out there(not to mention Ru Paul, who does a fabulous parody of the series as a regular challenge on Drag Race), why pick this played out hack? Perhaps the price was right in that regard but it may prove to not pay off in the long run there: 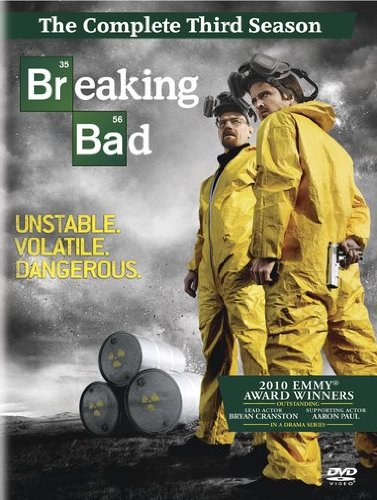 I could be very wrong about any or all of these shows(except for Match Game and Alex Baldwin, that I will not relent on) and if anyone does enjoy them, that's cool with me. These are short lived series, after all, and with any luck, the worst of them will not return next year.

In the meanwhile, it might be best for me to catch up on series that I missed the first time around. Lately, that has been Breaking Bad and I'm now up to Season Three, where things get more intense than they have been up to now.

Seeing the complete run of a renowned show long after it's finished can be a rewarding experience, not to mention a true oasis of entertainment in pop culture drought periods like this(spoilers up ahead in this video, you have been warned!):

Hello after a long absence. I got some spare time on my hands, so I thought I'd drop a few notes on ya...

I saw part of the Wrecked premiere and it was funny. However, a lot of the humor is silly, and the fact that it's a straight Lost-parody cannot be stressed enough.

I hadn't heard about Brain Dead, and it sounds completely insane. It might work, and Winstead is solid...

TV slashers will by and large always miss the point - and that goes double when they're emulating R-rated movies.

Alec is a funny man, but deeply damaged. I haven't even seen 30 Rock and yet I respect his comedic gifts. That said, he needs to go to Tibet for like 20 years. Maybe he can come back as The Shadow...

Good to hear from you! Yeah, Brain Dead might be okay but it feels so obvious-I might give that one a chance. As for Baldwin, he's lost what charms he did have for me a long time ago. Maybe he should team up with Billy Zane for a Phantom vs. The Shadow movie,that would be something to see:)