With all of the summer movie hype going on at the moment, there is one film that many of us were eager to hear more about and fortunately, we were blessed with a trailer for The Dark Tower.

The movie is set for August, not always a good release time yet there have been breakout hits such as Guardians of the Galaxy(which just launched it's sequel this past weekend) that have arrived in late summer so that date is not an instant cinematic death knell there.

For those not in the know, The Dark Tower is based upon a fantasy series written by Stephen King that spans seven books,plus a prequel, and there are plans to also have a TV series as well.

For this first film, Idris Elba stars as Roland, the last of the Gunslingers of Mid-World who finds an unlikely ally in a young boy named Jake(Tom Taylor), a resident of modern day New York. Both of them have a common enemy in The Man in Black(Matthew McConaughey), an ancient wizard determined to destroy the Tower which is a source of power that upholds numerous worlds.

Roland's ultimate goal is to save all realms of reality but that end point keeps getting harder and harder to reach, especially when any help he has along the way is usually rewarded with death:

The trailer looks amazing and if the movie is as half as good, I hope that we get another big screen sequel along with the upcoming TV show. Truth be told, I've only read the first three books in the DT series but now, I feel the time is right to re-invest in this saga.

Not just because of the movie, although it's a huge incentive-I am a long time Stephen King fan and this has become a major work of his, which means that I shouldn't hold off on it, particularly now that it's complete. Also, I did receive a sign from the literary gods and definitely shouldn't be ignored.

As some of you may know, I do some book buying at a local rummage sale at a nearby church during the fall and spring. Well, a week ago, what I do find at the book table but a plethora of Stephen King titles and several of those being illustrated editions of the Dark Tower series. A find like that is pretty rare for a sale like this and one that I knew I would regret not taking advantage of.

Since I have the first two volumes in my home library, I managed to stock up on Parts 3,4,5 and 7(number six, Song of Susannah I had to pick up elsewhere and the prequel, The Wind in the Keyhole, I'll check out from the library perhaps ).

Such a thing tells me that my reading project for next year ought to be exploring The Dark Tower books, so that will be one of my book challenges for 2018. It's good to have something like that to look forward to,along with the movie.

Like many fantasy series, The Dark Tower has it's devotees but this isn't the usual epic quest saga there. For one, TDT is a hybrid of several genres with the western being a major influence.

That steady spoke in the Dark Tower wheel has caused a few folks to grumble about Idris Elba being cast as Roland instead of a Clint Eastwood type, which I find ridiculous. While King has said that movies like The Good, The Bad and the Ugly did inspire the character, he is elated about Elba and if the author is happy, that is more than good enough for me: 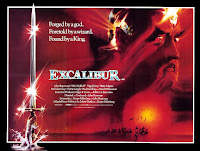 Another big influence for The Dark Tower is the King Arthur legend, a story that has been retold and reinvented more times than I can count.

Granted, many fantasy series have used King Arthur as the root of their story telling tree, however, it's never worn out it's welcome and for good reason.

I don't know which particular version, other than the original source material, that King has as his favorite but I do hope that, movie wise, 1981's Excalibur offered some creative choices to this series.

I've always enjoyed that bizarrely operatic take on King Arthur with it's gorgeous settings and costumes, along with the grand mythic tone that most of the actors embraced during their performances, especially Helen Mirren as Morgana. Not sure if there's an equivalent character to that wicked witch in TDT yet I'll be on the lookout for one, yes indeed:


For now, it's best to wait for my reading time to begin on(still have a challenge to finish up for this year after all) and even if the Dark Tower movie doesn't do well at the box office, the interest stirred up for established and new readers alike makes it all worth while. As things in the regular world go on, I get the feeling that we'll need to be reminded that there are other worlds that this and who better than Stephen King to be our guide?:

Since the movie is a sequel, you should actually start reading the series after the seeing the movie.

I did hear that, Old Darth(cool name,btw) and am planning to start the series in 2018, due to being in the middle of a yearlong reading challenge already. I take it that you've read The Dark Tower, so let me ask you-is Wind Through the Keyhole a necessary read or skippable?