On the eve of the very first big screen version of Wonder Woman, it's great to see that the advance word on the film has been strongly positive.

For many of us, this has been a long time in coming and with the odds firmly stacked against a female superhero movie, high hopes are being pinned on this production.

Considering that the fight to bring a fully realized Wonder Woman into the major movie leagues has been a hard fought campaign, I thought it might be interesting to take a look at how our Amazonian princess has been depicted as a warrior over the years.

In the iconic 1970s TV series, with Lynda Carter, Wonder Woman was a good fighter but not really a brutal one. Sure, she did take down the bad guys efficiently, either in groups or one on one combat, and thwarted a lot of evil schemes with intelligence as well as physical strength.

However, she wasn't a rock-em,sock-em type of hero. Instead, Wonder Woman tended to toss henchmen around, make incredibly high jumps and rely on her always dependable "bullets and bracelets" trick.

Also, in those days, there was much more use of the magic lasso to capture fleeing felons and get info out of them. Granted, TV standards and practices were much more restrictive back then but it was also a way to keep the character in the family friendly zone:

Speaking of family friendly, Wonder Woman's battle prowess in the Super Friends shows was even more laid back. Most of the fights involved running after escaping villains(again, major magic lasso use) and figuring ways out of the various booby traps that were set up for her and the other members of the JLA.

Most often times, mainly in the Battle of the Super Friends series, Wonder Woman was pitted against the Cheetah, one of the few female foes that DC was willing to showcase then. As fun as it was to see Wonder Woman have her own nemesis to go up against, their bouts did get pretty repetitive and usually ended with Cheetah being tied up by that lasso.

It would've be nice to see her take on someone else, like Lex Luthor or Solomon Grundy directly and not just in a group battle, that's all I'm saying. Sure she fought Darkseid on occasion but also got captured by him more often than not. The Cheetah is a formidable enemy but back then, she came off like a Catwoman knock-off: 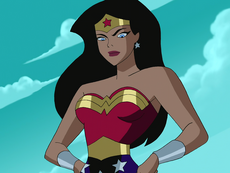 By the time the animated Justice League Unlimited series came around, Wonder Woman was finally allowed to be the true powerhouse that she had become in the comic books and graphic novels during the eighties and nineties.

She was not only a smart strategist, Diana was a full on fisticuffs kind of gal ready to throw down against any and all comers. Even her fellow JLU members were nearly outdone when forced to fight a mind controlled Wonder Woman, with four against one still not good enough odds:

Why all of this focus on Wonder Woman's fighting skills? Well, because, in my opinion, part of the reason that there has been a delay time and time again in bringing Wonder Woman to cinematic life is that some people would rather see her take on bad guys in a "ladylike" manner.

Mind you, I don't fault the Lynda Carter series or the Super Friends for their more milder approach. Just getting her on TV back then was a big feat in and of itself.  However, I do find it interesting that heroes like Batman and Superman have been allowed to grow more forceful in their actions in both live action and animated formats while Wonder Woman has lagged behind there.

Fans did and do want to see Wonder Woman at full capacity-she is the original Warrior Princess, after all! If her shoehorned role in the dreadful Batman vs. Superman movie wasn't enough to convince you, watch this short from a couple of years ago put out by Rainfall Films.

It's a bit eerie how similar it looks to the current Wonder Woman movie but it was a internet sensation for awhile due to showing everyone just the kind of WW film people were hoping to see one day on the big screen:


So, with that in mind, I hope that the new Wonder Woman movie will conquer the box office and pave the way for more fighting females on the big screen. Yes, we do value Wonder Woman for her courage and honor but seeing her do battle in true warrior maiden mode is the sweet surprise center of such a cinematic treat: