This month of FrightFall reading(thanks to Michelle and friends over at Seasons of Reading) has been quite the page turning fun,making the wait for Halloween feel not so long.

With tomorrow being our last day, I have a pair of books going neck in neck towards the finish line, starting with The Mark of the Midnight Manzanilla by Lauren Willig. I decided to combine my Series-ous Reading challenge with FrightFall on this one,which makes it sort of a two-for-one deal here.

It's the eleventh book in her Pink Carnation series and yes, I did jump far ahead in my quest to respectably catch up with this set of books(have completed the first four) but since this particular story has a Halloween theme, it felt permissible.

Our heroine for this tale of terror is Sally Fitzhugh, feisty sister of "Turnip" Fitzhugh(a charming bumbler often mistaken for a spy at times in the Pink Carnation world) who we first met in the Christmas themed entry,The Mischief of the Mistletoe.

Here, Sally is well out of finishing school and delighting in the joys of a London season of parties, yet bored with most of the proceedings. Taking up a dare from her friends during one such social occasion, she dares to sneak over to the mysterious manor home of  Lucien, the Duke of Belliston, newly returned to England and rumored to be a vampire.

While Sally does have a brief encounter with Lucien in his garden, no evidence of blood drinking tendencies appear to be evident. A good deal of the notion that Lucien is a vampire is due to the popularity of the Gothic novel The Convent of Orsino, written by the Pink Carnation herself as it happens! The influence of this vampire bestseller causes much stir among the young and fanciful set, sort of like Twilight for Regency era readers,if you will:

Lucien is haunted but not by any form of vampirism. Instead, it's the death by poison of his parents,which many wrote off as a murder-suicide committed by his mother,that drove Lucien to leave the country at a young age and make his way in the world elsewhere.

Returning home, Lucien is determined to track down the true killer, which may overturn a few messy stones as,according to his uncle, his mother may have been a spy for France. In addition to that, Lucien tries to mend emotional fences with the rest of his family(especially his sister who is now a debutante) but to no avail.

Running into Sally is the least of his worries yet her presence at another party is most fortunate. Upon being given a mysterious note, Lucien heads out for a midnight appointment with Sally at his side where the two of them discover a dead woman, arranged in such a way as to point the finger of blame at him. Worst of all, a wound on her neck suggests a vampire bite.

As Sally provides cover for Lucien from the authorities(not to mention society), he is forced to team up with her to solve the case before the murderer strikes again.

At the point that I'm at in the book, this pair of possible vampire hunters has run into a old friend from Lucien's past and a warning left with the deadly flowers of the title in a carriage. No doubt the real enemy is all too human but the Gothic lit element of the story is delightful,putting me in mind of Jane Austen's Northanger Abbey.

Granted, Lucien is far more grim than Henry Tilney and Sally a bit sharper than Catherine Morland was in that classic novel. However, they both have similar burdens to bear and do make for a charming couple that one can not help but to root for in the end:

The one book that I may likely finish before Halloween is done is Agatha Christie's Miss Marple:The Complete Short Stories. I was so inspired by these tales that I rented an episode of the BBC Miss Marple series(The Body in the Library) to watch over the weekend.

These round robin set of stories(one of which is actually a prelude to a crime in the making) ,where even Miss Marple finds herself struggling for a solution to a case at one point, are like a box of sinister sweets. You may suspect what fictional flavor is in each one but there's always a unexpected spicy twist right in the center of them.

Since this anthology is not as long as The Mark of the Midnight Manzanilla, the chances of my completing it before the witching hour tomorrow are very good indeed. I may have to watch a few more of those Miss Marple episodes as well, since they do feel like fine fall viewing there: 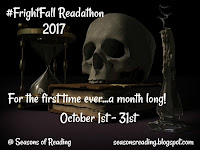 Now to wrap up my FrightFall reading altogether. First, I must confess to one DNF(Bellman & Black by Diane Setterfield,which I gave about thirty pages to but couldn't go on) and a book that I just didn't get to.

That one was Fear by Dirk Kurbjuweit,which I may have to try at another time. I simply overbooked my reading time,so to speak, but at least Bellman & Black is a library book and can go back without any fuss.

On the positive side, I did finish five out of the nine that I intended to read and that includes Sleeping Beauties by Stephen and Owen King, which was a massive book to say the least. Out of the rest of the five, my top recommendations would be Certain Dark Things by Silvia Moreno-Garcia and Lovecraft Country by Matt Ruff. If you're looking for new takes on well known horror themes, these are pitch perfect reads.

With any luck, my FrightFall this year will have six as my final score before all is said and done. Much thanks to Michelle Miller for setting up another fun readathon and for expanding the reading time this season! It's also great to check in with other readers and I hope that everyone who took part in Frightfall had a great time as well. Happy Halloween,folks and best wishes for plenty of treats rather than tricks on All Hallow's Eve: