Building a stack of mysteries for the latest Spring Into Horror 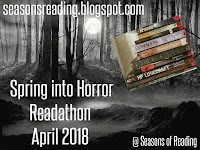 Spring is officially supposed to begin tomorrow(despite yet another snow storm on the horizon) but for some of us, April will be our starting point as the Seasons of Reading readathon known as Spring Into Horror will be underway.

For the whole of the month, you are encouraged to read at least one scary book and you are not limited to horror. Mystery, suspense and other thrilling genres are also included in the bookish fun.

A good portion of my SIH reading list is devoted to Agatha Christie, with a pair of Poirots and one Miss Marple to round things off nicely.

Since Death On The Nile is destined to be the newest movie remake, I just had to have it on hand. I did see the original 1978 film,starring Peter Ustinov as a rather charmingly droll Poirot. It's been awhile since I saw that version yet I might not rewatch that particular one during this readathon.

The made for TV Poirot series with David Suchet did take that classic story on and it should be interesting to see his rendition of the character, as so many of the Christie fans consider him to be the ideal actor for the role(plus, Emily Blunt was in this one as well, quite the extra special treat indeed!):

I'll also be checking out The Body in the Library(which would make for a fine film adaptation,if you ask me) with Miss Marple, along with meeting Poirot again for Evil under the Sun.

Yes, I did enjoy the big screen version of this with Ustinov as well(actually watched it again a couple of months ago and it holds up rather nicely). The story onscreen is wickedly entertaining but I do wonder if some of that delightful cattiness is reflected in the book.

Part of the fun of the film is seeing Diana Rigg as a former glamor girl square off against Maggie Smith, her one time rival. No doubt that bittersweet past between the characters is part and parcel of the overall mystery and yet, how much of that grin and bear it false front they exchange in public will be displayed on the page is something I have to look forward to:

In the non-Christie section of my SIH list is Sue Grafton's first big mystery, A is for Alibi, and a much more recent book, Midnight at the Bright Ideas Bookstore by Matthew Sullivan.

The bookstore of the title is set in Denver where Lydia Smith is pleased to work, selecting great recommendations for her regular patrons. That joy is shattered one night as she discovers that one of those constant readers has chosen the store as the perfect place to end his life.

As it turns out, he also left Lydia what there was of his worldly possessions, a box of marked up books that appear to be in code. With the help of a new friend, Lydia sets out to learn the truth about this man's demise, a truth that might also clear up a mystery from her own past as well. I've heard plenty of good word about this debut novel and eager to do some page turning detecting here.

The most massive undertaking of this particular readathon for me is going to be The Terror by Dan Simmons. Not only due to the length of the book(which is 955 pg count in mass market paperback), it is also about to air as a series on AMC later in March.

The plot is a blend of historical fiction and horror, as the crew of the ironically title ship,lead by Sir John Franklin in 1847, find themselves dealing with more than the strain of being caught in Arctic waters. This expedition seems to be hunted by an unknown entity whose purpose is unclear but it's intentions are truly deadly.

When I mentioned that the show would be airing soon in a previous post, several Seasons of Reading folks expressed their excitement about it as fans of the books and I caught that fever mighty quick. It should be fun to read and watch this story unfold at the same time:


Spring into Horror starts up on April 1(no joke!) and lasts until the 30th. There is still plenty of time to sign up and you can always follow along at Facebook and Twitter(#Spring Horror).

One of the best things about a readathon like this is seeing what everyone else is planning on reading. It's a good way to get a sample of fearsome fiction beforehand, seeing what might be your ideal chiller or perhaps something to scarily savor another time:

Midnight... And The Terror are both Super reads!

I've just signed up for this! I've been considering reading The Terror too but figure I'll watch The show first. I enjoyed seeing your list.