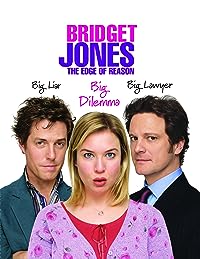 Welcome ,friends, to another installment of Bad Movie Month here at LRG where we endure the dreaded dog days of August by looking over some particularly dreadful films.

Our theme this year is "Badly Done, Brits!" featuring a quartet of English actors who have a very impressive body of work(not to mention a couple of impressive bodies themselves) yet also have an equal amount of regrettable film choices as well.

I hate to start things off with Colin Firth, truly one of my favorites. From his iconic Mr. Darcy in the BBC's Pride & Prejudice to his Oscar winning performance in The King's Speech and truly kick ass with style work in Kingsmen, Firth has proven to be a legend in his own time.

Unfortunately, our dear Mr. Firth has had the misfortune to make a few cinematic blunders as well. While his role as Mark Darcy in Bridget Jones' Diary was an instant classic, his reprisal in the sequel Bridget Jones: The Edge of Reason had all of the flair and flavor of a frostbitten TV dinner.

To be fair, leading lady Renee Zellweger and co-star Hugh Grant(who is getting the Bad Movie Month treatment, I assure you) are not much better as they do more than just walk through their roles again. It's more like they zombie march through them.

Most of the plot has to do with Bridget not believing that she and Mark can maintain a steady relationship, causing several pointless fights between them based on sitcom level insecurities such as her showing up at a big lawyer's dinner with bad hair and hastily applied make-up, then losing out on a quiz contest due to her overconfidence in Madonna trivia, followed by Bridget being torn between leaving pathetic pleading messages on the phone and talking to Mark in person as he's outside her front door:

While the follow-up book by Helen Fielding(one of the four screenwriters credited here) had a loose theme based upon Jane Austen's Persuasion,similar to the P&P feel of the original BJD novel, this movie chucks that completely out the window.

Instead, we get a retread of the greatest hits from the first film which are done rather poorly, from Daniel Cleaver hitting on Bridget with sleazy requests for naughty school girl tales and professing an admiration for her "granny panties", Mark and Bridget walking home sadly after a huge fight(with mournful pop song playing on the soundtrack), plus Cleaver and Darcy exchanging fisticuffs out in public

That scene is especially sad as not only does it lack the element of surprise that the fight in the first movie did but the bulk of it takes place in a large water fountain no less. Sure, Firth is well known for his P&P wet shirt moment, however, this whole sorry slapfight is soggy for the wrong reason:

In re-watching this film(which I painfully admit to owning on DVD), the complete lack of energy for this project is incredibly clear to see.

Unlike the lively humor and engaging character development from the original BJD, this second movie appears to have drained the life out of everybody and it's only the second one! I can understand being bored by playing a role for three,four or six times but if part two has the whole cast mentally checking out before the camera starts to roll, that's a bad sign.

Firth aside, the whole movie seems determined to just get every plot point over and done with. Most of the focus is on Bridget being incredibly clownish(I counted eight major pratfalls, three of which were on a ski slope) and the supporting characters such as her parents and trio of friends reduced to pointless cameos.

Sure, her best gal pal Shazzer goes with Bridget to Thailand(I swear there's one scene in which everyone competes to show how loudly they can say "Thailand?!") but that's merely done so that Bridget is completely innocent when caught with drugs at the airport, thanks to her good friend picking a mysterious new boy toy who sets them up.

The entire "unjustly imprisoned in Thailand" section is cringe inducing to say the least as Bridget leads her fellow prisoners in a Madonna singalong, realizes how petty her boyfriend troubles are due to hearing about the other women's emotional horror stories and tries to pretend her issues with Mark were just as bad and when released, Bridget's parting gifts to her cellmates are self-help relationship books and fancy underwear!

That sequence of events was bad then and even worse nowadays. Almost makes Bridget slipping and sliding down a ski course( ending right into a drug store where she engages in a bad translation bit about buying a pregnancy test) look far more dignified:

The movie was a true disappointment on many levels and why I bought this DVD, I don't know(other than an excuse to gaze upon Colin Firth). The original Bridget Jones's Diary still holds up well and it would be nice to forget that this sequel even existed,alas they did make a third one,which makes part two hard to ignore.

So, I must mock Colin Firth again next week as I watch Bridget Jones's Baby for the first time. If this is my first viewing, how will I know it's bad, you may ask.

At this point in my movie watching life, my bad movie detection skills are quite strong and just seeing the trailers for this flick(which replaces Hugh Grant with Patrick Dempsey) causes my cinematic defensive senses to begin a-tingling: