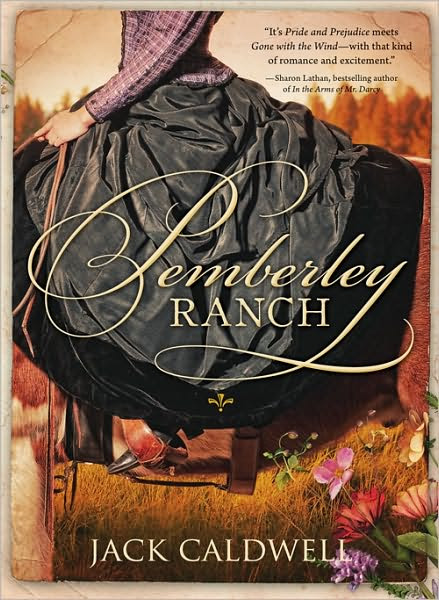 Jane Austen's Pride and Prejudice is not only her most popular novel amongst readers,it's also a favorite choice of writers looking to make their own imaginative mark on her time honored material.

Instead of the usual zombies and vampires that have been the current remix lit fashion of late, however,Elizabeth Bennet and her Mr. Darcy are now residents of the Old West,courtesy of debut author Jack Caldwell.

Pemberley Ranch introduces us to Beth Bennet,whose family has relocated from their small farm in Ohio upon the end of the Civil War and hopes to make a fresh start in the town of Rosings,Texas. While elder sister Jane has had the good fortune to become the bride of esteemed local doctor Bingley,Beth and her other sisters(Mary,Kathy and Lily)are still adjusting to their new home as well as the changes in society due to Reconstruction.

Beth has made an unexpected acquaintance in Will Darcy,the owner of Pemberley Ranch who also happens to be good friends with Doc Bingley,a fellow companion from his days fighting for the South. Since Beth is still in mourning for her brother Samuel,who died while in camp for the North,her first impressions of Darcy are not very favorable.

Her mindset becomes even more determined against him upon talking to George Whitehead,an up and coming wheeler and dealer with business ties to Cate Burroughs,a relative of Darcy's involved in shady land grabs throughout the area. Whitehead and his cronies have a long past history with Darcy that only few know the truth of,plus plenty of present reasons to discredit him,especially with the ladies:

Despite her intention to not like him,Beth and Will wind up in each other's company quite a bit due to their small social circles. While Beth persists in holding on to her bias against Southerners,she does strike up a friendship with Will's sister Gaby and their cousin Anne that slowly begins to change her mind and possibly her heart about a few things.

Meanwhile,Darcy has fallen deeply in love with Beth and when not on the lookout for Whitehead's schemes to take over Rosings,he longs to openly express his feelings to Beth and takes an opportunity at a local barbecue to do so. That fateful encounter does not end well but it does open a door into what happened to Darcy during the war that showcases his true nature along with Whitehead's. Regardless of that,the path to love for these two is still far from smooth:

This story is not so much a retelling as it is a re-imagined take on Austen's classic characters and Jack Caldwell nimbly transplants them into a time and place in American history that suits them rather well.

Granted,it is a tad more rough and tumble treatment than many P&P fans may be used to for Lizzie and Darcy but the social mores and cultural turmoil of this setting hold many of the same challenges that the originally conceived leading man and lady dealt with in more than one adaptation.

Indeed,it is to the credit of the source material to be so readily agreeable to new twists on it's tale and also to the credit of Jack Caldwell to be able to blend the Western genre with the Regency Romance as skillfully as he does.

Many of the changes to some of the plot points regarding a few of the supporting players are positive ones while the basic essentials are kept to both cleverly and logically within the narrative. Pride and Prejudice is no stranger to remodeling yet fans can rest assured that Pemberley Ranch is worthy of being included in any Austen lover's library:

The Western and post Civil War features of the book are nicely integrated into the P&P mold,making Pemberley Ranch accessible to history buffs and newcomers to Jane Austen's works as well. Perhaps some of the footnotes could have been placed in an afterward section of the book but they do clarify the added information and a few of the references made by the characters most succinctly.

The best part about bringing these characters to the Western side of the literary spectrum is how the inner strength and outer emotional struggles of Elizabeth Bennet gets a broader canvas to play on. While the reader does benefit from hearing more of Darcy's outlook on things,Beth is given as much free rein as her time period allows to be a truly formidable partner in life and death situations as well as in love.

Pemberley Ranch will be on sale this week at a bookseller near you and it should make for a delightful surprise this holiday season. Whether you treat a good friend or yourself to this splendid new spin on Jane Austen's timeless couple,revel in the continuing power of Pride and Prejudice and the ability of modern day authors to showcase the independence of such an amazing heroine,no matter what road she follows to find her true happiness:

Another fun read that I enjoyed too. We seems to be following each other in reading lately.

Thanks,Laurel-you know what they say,great minds think and read alike!:)