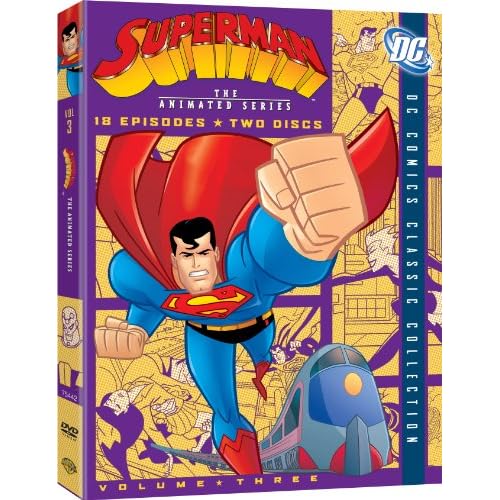 With Superman Returns slamming down at a multiplex near you today,many folks like myself will wait for the weekend to check it out. This gives you plenty of time to catch up with other Son of Kypton fare,like the latest edition of Superman:The Animated Series which has the last 18 episodes of the show. S:TAS was created by the same team that gave us Batman:the Animated Series and one of the featurettes has the whole gang assembled for some really good feedback on the show.

There are three sets of two-part episodes included-Little Girl,Lost(which brings
Supergirl into the mix),Apokolips...Now! and Legacy(both of them deal with Darkseid and his posse). Darkseid truly dominates the series at this point,way more than Lex
Luthor and particularly in Legacy,drives Superman to some pretty dark places. It's still in the kid friendly realm but one of the great things about this series(as in Batman)is the refusal to totally water down the content or give in to simple"what did we learn,children?"morality.

The show's not all gloom and doom. There are two episodes with superhero guest stars like Green Lantern(Kyle Rayner version)and Aquaman. The GL show is more fun than the Aquaman one,which has many plot points amazingly similar to the Aqua episode of Smallville this past season. Another fun episode is Knight Time(also a favorite of producer Alan Burnett)where Superman impersonates Batman after Bruce Wayne goes missing for awhile,leaving Gotham vulnerable to criminals. It's a nice blend of both
shows,plus plenty of humor and interesting villian cameos.

There are several commentaries available,one of which I did listen to. It was for the second half of Apokolips..Now!(I recommend watching the episodes first before putting on the commentary,especially if you haven't seen the shows before). There's alot of tribute talk about Jack Kirby,who passed away while the series was being made,(the look of character Dan"Terrible" Turpin is based on Kirby)and the conculsion of AN! is dedicated to him. Kirby was the original creator of Darkseid and the New Gods and his influence on the creative minds at work here like Bruce Timm and Paul Dini(one of my favorites)clearly shows.


Another special feature is a preview of the new documentary,Look up in the sky!The amazing story of Superman put out by Bryan Singer and Kevin Burns. It's a nice taste of the final product(and yes,there are Smallville clips,my fellow fanboys and girls).More satisfying is Superman;Behind The Cape,that has voice actor David Kaufman hosting a chat with Bruce Timm,Paul Dini,Alan Burnett and Glen Murakami. The fellas give a nice overview of the arch of the final episodes and list their best and worst episodes(atleast by fan feedback standards).

So,is it neccessary to have watched the earlier shows in order to enjoy this new set? No,but if you love DC comics and modern takes on classic characters,the entire series is a keeper for your video library. It's not as lengthy as Batman was but packs quite a punch nonetheless. Also,there's an array of great celebrity voices such as Tim Daly as Supes,Clancy Brown as Lex Luthor and odd surpises like Ed Asner going the vocals for Granny Goodness! Too bad they didn't get these guys to do the Teen Titans revamp(I so hate the anime style and kiddie cuteness given to the likes of Raven,plus the theme song makes me want to slam my head against the wall)but hey,atleast there's some folks out there getting it right.
Posted by lady t at 10:31 AM