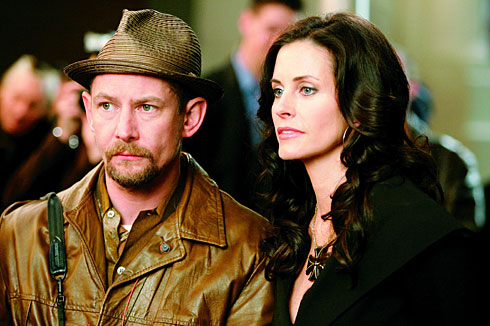 Courtney Cox's new series,Dirt,debuted on F/X this week and so far,I'm not that impressed. Courtney plays Lucy Spiller,the head of two magazines that deal with celebs-one is called Now and the other Dirt. Guess which one is the scandal sheet?
Lucy is sort of an evil Lois Lane with photographer Don Konkey(Ian Hart)as her schizo Jimmy Olson,helping her get the goods on naughty star doings such as a sports hero who claims to be a big family man but likes hookers to use a strap-on during sex.

Most of the Hollywood stuff is pretty dull and the attempts to lighten Lucy up undercut her character. Courtney is great at being an uberbitch and she should just run with that. I did like the part where she tasered her one night stand in the nuts(looks like that guy is going to be around for awhile,which is damn weird in my opinion)and when she's snapping at her staff in Dirt meetings. Don Konkey is really the one who's more interesting. His character is supposed to have a "controllable" form of schizophrenia but if seeing words float in the air and trying to kiss faces that appear in the back of a stranger's head is controllable,that's not the type of treatment I'm looking for.

I'm going to give Dirt alittle more time to grow on me;this is an F/X show after all and it's bound to get wackier. If I can watch three episodes of Studio 60 on the Sunset Strip before bailing,Dirt shouldn't be too hard to swallow for a couple of weeks. Here's a preview of what's up for next Tuesday:

Michael had a very good week at Top Chef,despite suffering the pains of a pulled tooth. He won the Quickfire(which no longer gives immunity)and the Elimination Challenge which was to create a dish based on the Seven Deadly Sins to be served to Debi Mazer(recently seen on Ugly Betty and Entourage)and friends. Another drawing of the knives gave each chef their sin and Michael was allowed to trade Lust for Envy with Marcel. Marcel made a cherry tart with foam(he just loves making those foams and gelees,doesn't he? I agree with Mazer that foam looks like"cat spit.")and Ilan pointed out more than once that cherries are supposed to decrease your sex drive.

One of the times that Ilan mentioned that little factoid was when presenting his Gluttony desert to the guests(which was a soggy mess). Not cool,Ilan. Yes,Marcel is a complete tool and I'm surprised that no one has beaten him up yet but it seems petty to slam his dish like that,not to mention unprofessional. Betty wound up packing up her old kit bag,thanks to her slothful soups that were thick and grainy.

Next week,the remaining six form two teams and do a trial run of a restaurant. My advice to Marcel:Dude,most of these guys are bigger than you and have easy access to knives,so you might want to check yourself before you wind up in worse pain than Michael. Elia likes you but she doesn't strike me as a street fighter.

On January 9,Netflix will have available a Heroes"Season Summary" DVD,which gives a recap of the series thus far,plus a pilot for a show called The Black Donnellys. This might be just a really long promo but I put it at the top of my list for next week and will review it here for my fellow Heroes followers. Atleast we're getting some new ads for the next episode,Godsend,that look kickass:

Ugly Betty: I spent New Year's Eve Day(if that's the right term)watching ABC Family's UB marathon which not only got me ready for more new shows but caught the interest of my mom as well(she kept claiming that it was hynoptising her into not doing anything else that day!). Tonight we get a shiny new episode,where swag from the Mode closet is up for grabs-hope Betty can get something for Justin and maybe find a way to ditch Walter once and for all!

Top Design: Bravo's having their own version of HGTV's DesignStar which starts right after Top Chef has it's finale at the end of January. TD will be hosted by Todd Oldham and have three judges,one of whom looks like Amanda from Ugly Betty. Kelly Wearstler could be her good twin,I swear!

I found an audition clip from a hopeful contestant(who didn't make the cut)that's pretty indictive of the type of folks we may be seeing compete:

I watched a few minutes of Dirt but it seemed sensational for the sake of being sensational. Not really provocative. I'll try to see the first episode all the way through. Then I can have a true opinion. I'll get back to you.