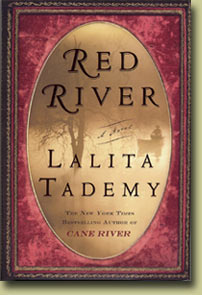 I didn't read Lalita Tademy's earlier novel Cane River but the good news for folks like me is that not only is it not necessary to do so in order to enjoy her follow up book,Red River,but that you will have another story of the Tademy family to look forward to.

The plot of Red River takes place in Colfax,Lousiana during the Reconstruction period,where the newly elected Republican sheriff enlists the aid of local black men to help him take his new office with promises that Federal troops are on their way to protect them and their families from retalitation from angry whites in the area.


Israel Smith is one of these men who take up the cause,despite the worries of his wife Lucy and his own concerns at involving his young sons,David and Noby,in this stand. Along with Sam Tademy(who one day plans to start up a school for black children),Israel and the rest of the volunteers backing up the elected whites slowly come to realize that help is not forth coming and must decide if staying or going is the best course of action.

Soon enough,it doesn't matter who is actually in on the side of the Republican men as all of the black residents of Colfax are targets of vicious and violent white men who slaughter a good number of men holding their ground at the courthouse(even shooting those who are literally smoked out and wave flags of surrender)as their women and children flee for their lives out in the wild.

Tademy based this story on her family's actual history(as she did with Cane River)and even adds historical photos which bring a strong sense of poignancy to the fictionalized characters. What happened in Colfax was considered a"riot" by early historians but Tademy exposes that pathetic attempt at whitewashing the horrors that went on without bashing you over the head with the facts. Rather,she makes the struggles of those who stayed and those who went as indentifable as what happened to the survivors of Hurricane Katrina today,or any other life changing event that marks an entire community and it's decendants.

Red River is a beautifully sad but compelling read and if Oprah was still running her book club,Lalita Tademy would join Wally Lamb in the Two for Two Book Selection Club. If you're interested in finding out more about Tademy's books or the lady herself,you can visit her official website by clicking the title link above. This is a tale worth telling,if only to honor those who came before us and to not forget how injustices were,and can still be,unpunished.
Posted by lady t at 12:11 PM