There's been quite abit of book stuff in the news this week and if you didn't catch any of it,here's a brief roundup to set you straight for the weekend: 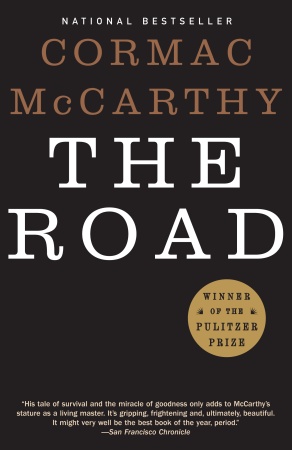 Oprah declared herself done with the whole memoir,since nothing could Sidney Poiter's Measure of a Man in her opinion(and Poiter is a hard act to follow) and has gone back to selecting current fiction. Her selection is Cormac McCarthy's The Road,a book that has gotten tons of praise and awards. She even pulled off what many would consider to be the impossible;McCarthy has agreed to appear on the show. McCarthy's a nortorious recluse-no author tours,no book signings,nada,zip. Boo Radley had more of a public life than him.

While I'm not always a fan of Oprah,I am happy to see her go back and chose books written in this lifetime. Hopefully,she'll take a chance on some as yet unknown writer out there and give him/her a shot at wider distribution. The Road is a departure for her in some ways(it's a story set in post-apocalyptic America) but in others,it's not(the main characters are a father and son). Instead of a dysfunctional family coping with the world,The Road has a dysfunctional world that a family has to cope with. Plus,Vintage released the book in paperback sooner than planned,thanks to Oprah. Oprah fans should be pleased with that.

HARRY POTTER AND THE BOOK JACKET OF SECRETS

The cover art for the last Harry Potter book,Harry Potter and the Deathly Hallows,was revealed to the public for both the American and the British editions. Mind you that in England,they have two different covers for the Potter books-one for the adults,the other for the kids. This one is the children's version: 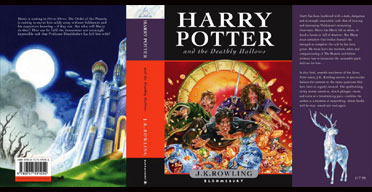 The US version is designed by Mary Grandpre,who has done all of the American covers and looks pretty damn cool to me. Nicely goth but not too overdone,plus is it just me or does Voldemort look like the Emperor Palpatine from Return of the Jedi? Voldemort's robe has more of an Obi Wan hue but still..... The ABA(Amercian Booksellers Association)has announced the winners of the Book Sense Book of 2007. Book Sense,for those don't know,is a independant bookseller program that releases a monthly listing of the top books to read,with blurbs contributed by independant book retailers across the country. The Book Sense awards are voted upon by indie book people. The winner for fiction is Sara Gruen's wonderful novel,Water for Elephants. In other catagories,The Book Thief by Markus Zusak recieved Best Children's Literature while Owen & Mzee:The Story of a Friendship written by Isabella & Craig Hatkoff,with Dr. Paul Kahumbu took the honors for Best Illustrated Children's Book.

Nora Ephron's I Feel Bad About My Neck won Adult Non Fiction and the list of Honor titles include Oprah's new pick,The Road,along with The Inheritance of Loss by Kiran Desai,Thunderstruck by Erik Larsen,Peter and The Shadow Theives by Dave Barry & Ridley Pearson and Pirateology. The awards will be given out during the next BEA convention which will take place in New York. The ceremony will be held at the ABA Marriot in Brooklyn,NY(Feel free to do a "BROOOKLYYYN! shout out,if you must there). Congrats to all the winners and good reading to all and to all,a good read!
Posted by lady t at 11:48 AM

I'm reading Measure of a Man right now, solely because I caught Oprah's show last week where she had dinner with Sidney Poitier and a few lucky readers to discuss the book. I forgot what a dignified, fascinating man he is. And the memoir matches him perfectly (no surprise, I guess).

Don't know about The Road, though. I think I need you to read that first, if you're so inclined.

And isn't it funny how every single thing about Harry Potter makes the news? This week is was the cover art. Not long ago it was the announcement about the release date of July 21. Could we all be any hungrier for that book??

So,does this mean that I'm your offical book taster,Robin? Cool,but I need a T shirt or something else to showcase my official status to the world:)


I did catch the Sidney Poitier dinner at the end of the show(Oprah really went all out there)and he is truly a class act. We need more role models like him to be honored in society.

Pottermania is going to reach some serious critical mass this summer,with the last book coming out and Order of the Phoenix hitting the movie theaters. Get EW this week-they have a huge write up on the movie,plus a great HP quiz.

Yes, please be my official book taster! Love the idea! I'll see what I can do about the t-shirt.