Last week on The Office,Annoying Andy was hitting on Angela(who is in Super Cranky Mode,since the big Dwight break-up)and went the extra mile by serenading her with ABBA and having a couple of buddies do some telephone background vocals. That was one of best bits of the whole episode(I really enjoy these one hour versions of The Office and will be missing them when they go back to the regular half hour format)and one of the sweetest of this show. Andy may be a total jerk but anyone who has the good taste to romance someone with ABBA can't be all bad:

So,inspired by that,I decided to post a few of my favorite serenade scenes from movies and TV,with clips of the original artists performing the song chosen(like this ABBA one from 1978). A little compare and contrast,if you will: 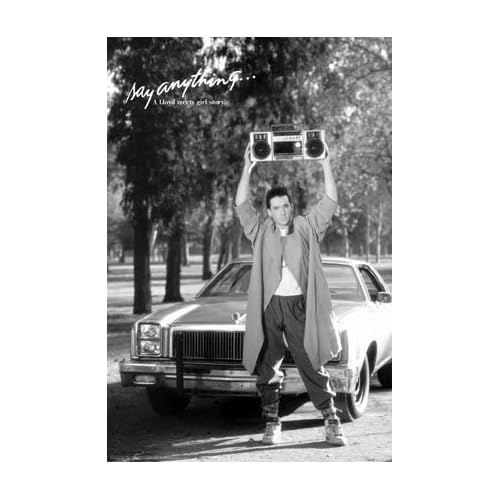 First off,I must warn you that there will be no John Cusack with the boombox clip from Say Anything here. Yes,I like the movie and Cusack,plus the scene is nice but he doesn't actually do the singing. To me,it's more of a romantic risk when you use your own vocals and when the object of your affection is front and center,paying attention to your musical pleas for love. Diane just stays in bed during that entire bit,if I recall correctly. Sorry to be picky but standards are standards,folks!

Let us start off with one of the better Shakespeare For Teens films that were all the rage a few years ago. Ten Things I Hate About You was a high school version of Taming of the Shrew that had Julia Stiles fighting off the advances of Heath Ledger before he even consider climbing that Brokeback Mountain(but just about to become a
Knight's Tale). In this scene,he goes all out on the soccer field to soothe the savage beastly behavior of his intended one:

The song he croons to her is the Frankie Valli hit,"Can't Take My Eyes off of You",which is a pretty classy tune for a modern teenager to take on:

One of the tenderest moments of the seventh season of Gilmore Girls was Lorelai's karoake version of "I Will Always Love You",made even more tear jerking by Luke's casual walk-in during her number. No matter how you feel about the ups and downs of that relationship,you got to give the lady credit for taking that song all the way to the bitter end there. And look on Luke's face..*sniffle*:

Alas,some serenades are rather sinister than sweet. Blue Velvet certainly showcased the dark side of many things,including the use of love songs as an expression of endearment. Dennis Hopper is at his insane best in this film,especially when he explains to Kyle MacLachlan about love letters from the candy colored clown:

Roy Orbison's music is truly haunting in it's simple beauty,which is most likely why David Lynch chose it for the movie:

To leave things on a better note,Ewan McGregor's singing voice is quite amazingly displayed in Moulin Rouge. Yes,it's a musical but musicals count,in my opinion!

While Kidman and company do a fantastic job here as well,McGregor's vocals are truly show stopping as in this scene where he gets Satine to shut up with her phony sexed up hysterics and have her breath taken away by "Your Song":

So,those are my picks(or atleast the ones I could get on YouTube). Don't be shy,share your own favorite romantic and/or interesting serenades with us here at LRG. It's for people like you that keep it turned on.
Posted by lady t at 12:01 PM

Andy is bizarro but you know how I feel about ABBA. Muriel's Wedding was the best when they sang Waterloo. The Broadway version of Mama Mia was heartbreaking when she sang The Winner Takes It All. Can't wait to see Meryl rip it up onscreen.