Jennifer 8. Lee serves up some All American cultural cuisine with her Fortune Cookie Chronicles

One of the many hallmarks of inclusive American culture is the variety of commercial foods that have become over time to be a natural part of our country's dining landscape,such as hot dogs,hamburgers,pizza and apple pie. One of the biggest( and therefore, taken for granted)take out cuisines of America is Chinese food,which is just as well known as any major fast food chain in the world without having to spend millions of dollars in advertising and is more available throughout the US than all of them combined. New York Times reporter Jennifer 8. Lee explores the impact that American Chinese food has had on society and how it has also reflected on cultural attitudes and tastes of the times with her just released book,The Fortune Cookie Chronicles. She first started on her quest by investigating the origins of fortune cookies themselves,which are not Chinese at all,but actually a Japanese dessert item brought to San Francisco and made popular by Chinese restaurants after WWII(a result of the displacement and internment of Japanese Americans during that time period).

She also explores some of the traditional nontraditional(in China,that is)mainstays of the American Chinese menu such as chop suey(the first successful attempt to cater to Western tastes) and General Tso's chicken(named after a man best known for his battle skills by his descendants,who the author visited,rather than this dish),along with a few unusual tasty twists,like chow mein sandwiches and Szechuan style alligator with soy vinegar crawfish. But Lee just doesn't tell a few quaint food fables; she digs deep into the bigger picture of the take out provider's culture and it's social statements upon our society. For one thing,the reason that many of the early Chinese immigrants to America went into the restaurant business was that cooking was considered "women's work"(along with laundry)which negated any violent resistance from men in the areas they settled in, who felt threatened by foreigners wanting to prosper by owing land. Today,there are people who pay thousands of dollars to cross many dangerous borders just to get to the US where they are guaranteed restaurant work(many even learn "restaurant English" before making the journey). Most of the staff of any American Chinese restaurant in every state has been hired thru Chinatown networking,which also handles the sales of mom and pop take out places across the nation. 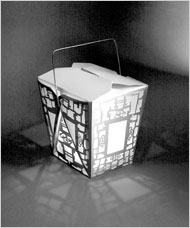 Least you think this is a muckraking tome,don't despair. Lee simply presents the realities of the American Chinese cuisine world without sugarcoating or stomping upon a soapbox. She also looks into the international take on Chinese food,American style such as the attempted regulation on soy sauce exports and checking out Chinese restaurants around the world to find the best one outside of China.

The Fortune Cookie Chronicles is an altogether positive look at how an everyday thing like the food on our plates has lead to the advancement(along with some of the lingering setbacks) of folks once considered to be "exotic" and who are now fully mixed into the fold of our melting pot society. Actually,Lee describes it as "stir-fried",blended together while still keeping their own unique flavors. That's the best term for it.

Jennifer 8. Lee(yes,that's her actual middle name- the number eight symbolizes prosperity in Chinese)gives the reader some stimulating food for thought along with quite a few fun facts to chew on while looking over your favorite Chinese take out menu. You definitely won't just casually place your usual order in the same way again.

The Fortune Cookie Chronicles is on sale now and I urge anyone interested in adding some variety to their literary diet to get a copy. You can only eat apple pie every day for so long,folks.
Posted by lady t at 11:45 AM