Idol gets some swagger,Heroes closes another volume and more Tales of Charles Dickens

American Idol's Rat Pack week had more of a traditional approach to the material,with Adam Lambert showing off some swagger with style as he performed "Feeling Good." Simon's only criticism was that he was being theatrical again,but hey,this is the Rat Pack we're talking about here. Not for nothing,but those fellas really loved to showboat on stage.

Why Adam was in the Bottom Three is baffling;he and Danny had the best performances of the night. Allison did alright with "Someone to Watch Over Me" but Kris was back to his usual boring self and Matt,ehh! What he did with "My Funny Valentine" was far from funny or sweet.

Well,Matt finally got the boot and it's about time,people! The guy is not untalented but his personality on stage is the perfect remedy for insomnia,that's all I'm saying. Good luck,buddy and take this Sanjaya award with you on the way out:

YOU DON'T MAKE ME SMILE

THE TALENTED MR. DAMON DOES IT BETTER

Heroes completed their recent plot arc,which had Sylar deal a fatal blow to Nathan and have his plan to impersonate the President foiled by Peter(a very sweet scene there),who now has his shape shifting ability.

I'm rather forgiving of the storyline set-ups on this show,but the solution to the Dead Nathan problem(not a problem for me,since he's been a rather self serving son of a bitch since Day One)is not the smartest one,folks. Angela and HRG persuaded Matt to brainwash Sylar into believing that he's Nathan and even burned the body of the shifter who died while still in Sylar mode in front of the remaining heroes to prove it.

The obvious flaw in this secret plan is in thinking that Sylar can be safely suppressed for long. Why not have Peter pretend to be his brother instead? He took that little hat trick from Sylar and knows Nathan the best,not to mention that Peter doesn't have a lot of ties to the outside world at this point(whatever happened to that Irish girl from Season 2?)and his disappearance from public view wouldn't cause too much of a fuss.

I get why the writers did this-it's a way of having their killer cake and eating it,too. They get to kill off a character but not toss him out entirely,plus keep Zachary Quinto on the back burner for awhile to give him some movie making time off.

That's cool but I wish this had been thought out a little bit more,guys. This scenario just doesn't seem too savvy coming from Angela and HRG,not to mention more secret keeping from Claire and Peter(yeah,that's not going to make them mad later on,no!). Some of this may also be a throwback to the possible dark future idea planted in Season One but judging by the hint of things to come next season,this plan is destined to blow up in their faces,big time:

Masterpiece Classic will be wrapping up their Tales of Charles Dickens series with a new film version of The Old Curiosity Shop,starring Derek Jacobi as the Grandfather who forces Little Nell(Sophie Vavassuer)to hit the road with him in order to escape the vile wrath of Daniel Quilip(Toby Jones),one of the most sinister creations in Dickens' rogue gallery.

This salute to Dickens has really given us some great TV time;Little Dorrit was a true treat to follow(thank you,Andrew Davies and company)and it was fun to see Daniel Radcliffe and other Harry Potter alumni again in David Copperfield. The retake on Olivier Twist was nicely done as well and hopefully,Old Curiosity Shop will do the book justice. Another successful showcase for one of the great writers of the world: 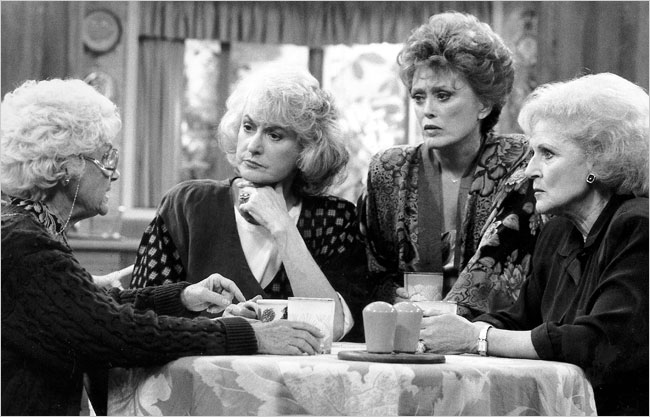 BEA ARTHUR TRIBUTE: Another Golden Girl has gone from our midst. As many of you know by now,Bea Arthur passed away on Saturday. Her career was a long and fruitful one,taking her to Broadway,Hollywood and true TV icon status for her ground breaking sitcom Maude as well as her stint as Dorothy,aka "Pussycat" on Golden Girls.

One of my favorite Dorothy episodes was the one called "Journey to the Center of Attention",where Blanche tries to get her out of her dateless slump by bringing her along to the Rusty Anchor,a regular man hunting spot of Blanche's. Dorothy doesn't feel comfortable at first,but her singing ability proves to be more of a lure to the guys at the bar than Blanche's sexy hijinks.

Bea Arthur did get to sing at various times on the show,but her rendition of "What'll I Do" is truly touching and the main cause for me to stop and watch this episode whenever it's on. That tender little moment,in my opinion,is a pitch perfect salute to Arthur's life and times. She was a real one of a kind lady and will be missed by one and all: