Bad Movie Month puts out a restraining order on The Fan One of the classic stumbling blocks on the road to box office gold is the awful adaptation;whether the source material is a bestselling book,hit play or a once popular sitcom,Hollywood never seems to learn that some things are best left alone.

Speaking of being left alone,the 1981 thriller The Fan(not to be confused with the 1996 Robert DeNiro/Wesley Snipes movie which shares the same title and similar theme)first began life as a novel by Bob Randall which told the story of a stalker and his celebrity victim thru letters,the kind referred to these days as "snail mail." 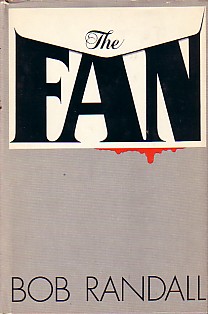 I read the book twice-once in a Reader's Digest version(they cut out the naughty words)and then in it's intended format. It was a decent suspense story that might have made a juicy little fear flick but unfortunately the folks who translated it to film did that as smoothly and subtly as a ShamWow or a SlapChop commercial.

Lauren Bacall stars here as Sally Ross,a once glamorous star of stage and screen who is still kicking up her heels on Broadway while having an on-again,off-again relationship with her ex-husband Jake(James Garner).

Sally's stalker is Douglas Breen(Michael Biehn in pre-Terminator mode),a delusional record store clerk who walks around with a persistent psycho scowl on his face as he stalks Sally the old fashioned way,by following her from afar,typing up love letters on a daily basis and knocking down fellow fanatics in order to swipe their stolen souvenirs:

Douglas starts to get annoyed at Sally's lack of personal response and blames Bella(Maureen Stapleton),her no nonsense secretary who tries to get Sally to buy a clue about how not "harmless" the letters are. Douglas decides to prove his love by getting slash happy towards anyone he sees standing in his way,starting with Bella, and has an uncanny ability to whip out his trusty pocket knife anywhere,even while underwater in a YMCA pool or planted at a remote hideout to set up his fake suicide(I wish I were kidding,folks,I really do): 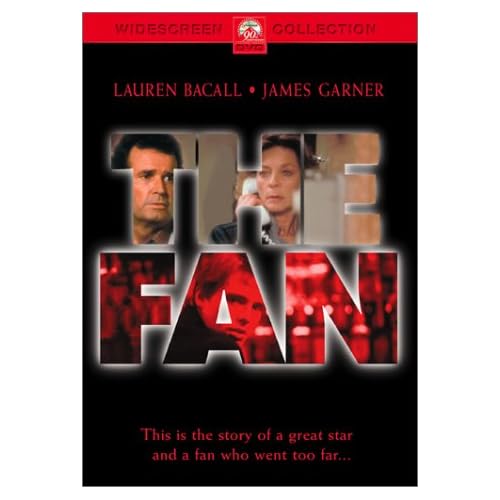 The saddest thing about this movie is the waste of talent;Lauren Bacall and Maureen Stapleton attempt to have an "All About Eve" flair to their early scenes while James Garner is pretty much eye candy and a shoulder for Bacall's character to either cry on or yell at.

Not to mention that Bacall is supposed to act mostly helpless through the story when she looks perfectly capable of kicking Biehn's crazy boy ass,especially during the painful finale scene that has her dodging blows from a riding crop and then giving a little speech about how folks are tired of being bullied by wackos. Maybe she should've delivered that bit of business to the jokers who talked her into making this clunker.

The scariest part of the movie is not Douglas and his slice and dice romantic charms(which range from bragging about his "equipment" to offering the object of his affection an intimate connection with a meat cleaver)but the musical that Sally is supposed to be starring in. I can't decide which is more chilling,the fact that Douglas is stalking someone who looks old enough to be his grandmother or Sally purring about "hot love tonight" on stage:

This movie also had the bad roll of the release dice by coming out shortly after the tragic death of John Lennon,which gained it some publicity but not the kind that anyone in their right mind would want. Years later,the film still leaves a bad taste in your mouth and mind.

An unsuspecting soul might be bored enough to check this movie out,thinking that it's just another celebrity stalker piece like Misery. In this case,The Fan is only capable of making you truly miserable long before the last curtain call: