The good,the bad and the so-so of this year's Golden Globes 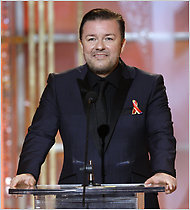 The Golden Globes got off to a soggy start last night,as everyone attending had to use umbrellas on the red carpet(rain is so not a big deal,particularly if it's not at monsoon level but you wouldn't know that from the way the media folks were going on about it)and Ricky Gervais overdid the self-promoting gag in his opening bit.

Dude, holding up your own DVDs is too cliche,seriously. Not to mention that last minute plug for your new show in February during the end credits,so not of the funny.
Although,that nice swipe of snark at Mel Gibson was a good one.

Anyway,let's get to the highlights and low points of the Golden Globes that made it worth talking about:

BEST SPEECH OF THE NIGHT

It's rare that the first acceptance speech of the night turns out to be the one worthy of getting it's own award but a truly golden moment took place when Mo'Nique won for Best Supporting Actress in a Motion Picture. Her performance as the violently vicious mother Mary in Precious has been receiving major critical buzz and serious Oscar talk,which her win last night made very real.

Just listening to her speak with sincere heartfelt emotion and gratitude towards the people in life who helped her reach this artistic high point proves that down to earth honest talent is out there still,waiting and working for his/her time to take the world by storm. I look forward to seeing Mo'Nique take her well deserved Oscar glory later this year:

NOBODY DOES IT BETTER

The Cecil B. DeMille award went to Martin Scorsese and was presented by two of his best leading men,Robert DeNiro and Leonardo DiCaprio. It was a great tribute,despite the questionable taste of the jokes about just how much Scorsese loves film,and Scorsese's speech was appreciative of not only the many people he has worked with over the years but the history of cinema and the need to keep it alive and flourishing for future generations as well:

NOT MUCH OF A SURPRISE THERE

Plenty of folks seem to be amazed that Avatar won Best Picture but not me. No offense,but Helen Keller and Stevie Wonder could've seen that one coming. A major box office hit with tons of mass appeal,it would be shocking if it didn't win.

James Cameron getting Best Director along side that was a tad predictable,too, but how that will carry over into the Academy Awards is not as crystal clear.

On the TV front,Mad Men getting Best Drama was another non-startling event;as much as I like the series,it would be nice for the likes of True Blood or Dexter to take some top honors. Dexter at least scored a couple of good wins for Michael C. Hall(get better soon,buddy)and John Lithgow in the Best Actor categories


I was hoping for True Blood to get something here,but alas,the gang at Merlotte's had to settle for the usual "it's an honor to be nominated" round of drinks. It was nice to see Anna Paquin and Stephen Moyer at the show,even if Anna's dress was a tad distracting there(I didn't see her shoes on camera but whoa nelly! What was up with those high class clod hoppers?)

Also was rooting for Little Dorrit to win in the Best Mini Series/Made for TV Movie section,but Grey Gardens scooped that up. Granted,I didn't see Grey Gardens but since it's a fictional version of an actual documentary about a pair of connected to the Kennedy clan wacky home bound divas(who would be ideal subjects for an A&E reality series these days),I have some doubts about it's merits.

Jane Lynch's snarky Sue from Glee seemed like a shoo-in to win for Best Supporting Actress in a TV series but Chloe Sevigny got the nod for her work in Big Love instead. Guess scheming sister wives trump off-the-cuff speaking cheerleading coaches for the moment.

Jeff Bridges made a few people sit up and take notice for his Best Actor win for Crazy Heart,a movie that's been stirring up some small praise and notice lately and even added a Best Song win to it's Oscar seeking resume. Up in the Air has become the critical darling for Oscar season but it looks like there will be some real competition for that victory this spring.

Along with Mo'Nique,congrats are in order to Glee(Best Comedy),Inglourious Basterds' Christoph Waltz,Toni Collette for The United States of Tara and Sandra Bullock for The Blind Side. Don't be surprised when Bullock gets that Academy Award nom later on-this role is her Erin Brockovich Golden Ticket to the top of the award show heap.

This year's Golden Globes didn't break any new ground but they did get the ball running well enough for the rest of the award season to follow. While we didn't witness any influenced by alcohol onstage hijinks,a hilarious parody of an acceptance speech was granted to the viewing audience by the sober yet far from serious minded Robert Downey,Jr.as he got his Best Actor in a Comedy award for Sherlock Holmes. That,second only to Mo'Nique's speech,was worth the price of admission: