A burning issue to consider during Banned Books Week this year

Tomorrow is the start of Banned Books Week(September 25-October 2),the literary community's annual look at how the freedom to read has been and still is under siege. Freedom of thought is one of our most valued rights and part of that deal includes allowing people of all ages to choose their reading material without fear of reprisal.

Freedom of expression is another cherished right and as Peter Parker's Uncle Ben once wisely said,"With great power comes great responsibility." Normally,I don't get political on this blog(there are more than enough places online for folks to have those discussions)but for Banned Books Week this year,it's necessary for me to address the red hot elephant in the room. 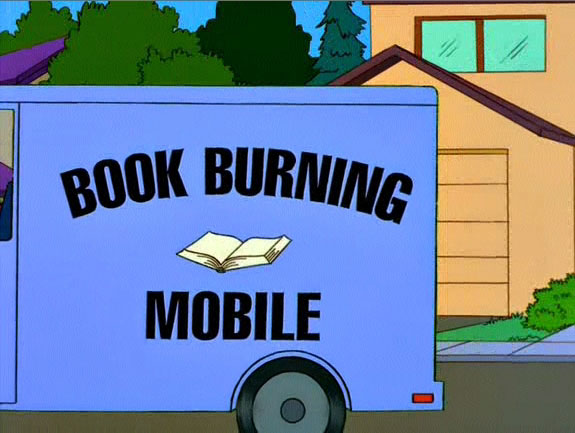 Yes,we have to talk about book burning,that ugly sizzler of a subject,which made the news over the end of summer. While not getting into the whole ongoing debate that spurred a certain person to call for a nationwide bonfire of a well known religious text,it's safe to say that destroying anyone's spiritual writings is wrong for whatever reason.

Of all the ways in which to suppress reading that there are,book burning is the ultimate attack upon not only lovers of literature but authors and ideas themselves. It's a horrific notion that is scarier to bibliophiles that any imaged monster or evil curse could ever hope to achieve:

In order to make something less frightening,it's good to take it apart and see what really makes this terror run. To begin with,why fire? You could just as easily destroy books with water or scissors(not trying to give some misguided soul out there any ideas,I swear!) or any other method that allows for a major public display of force there.

Fire,as well demonstrated in the classic Ray Bradbury novel Fahrenheit 451, has strong symbolic meaning along with it's capacity to render objects into ashes. It represents positive as well as negative influences upon humanity and in the right hands,can be a source of progress and protection for those seeking a better way of life:

A key element that gives book burning any solid ground to stand on is mob mentality. Many of us would prefer to believe that we are not so easily persuadable as to be swept up into group based hatred but even the best of us can fall sway to fears from peers.

This mindset has been used by both those wanting to do the right thing for all as well as those only concerned with gaining power and delighting in chaos. Beware the urge to follow in lockstep,regardless of what the theme may be,because such social movements have not only lead to the burning of books but of people,too:

Part of the fear that drives people to book burning is of change;from the world around them to their companions in life.

Seeking to be educated is a time honored path towards finding personal happiness but some of the major obstacles along the way are those who want everyone in their social sphere to stay in their place and go no further than their own backyard.

Trying to keep someone planted firmly on your level is actually a sign of insecurity rather than pride in your origins as many will maintain as a defense for such emotional sabotage. Direct and indirect opposition like this can quickly backfire,however,adding more fuel to the fire driving that special someone in life farther away from you than any book can:

As we celebrate our freedom to read,let us hope that book burning becomes one of those bits of history that we are no longer doomed to repeat. It's hard enough for local libraries to get the proper funding they need these days without having to worry about their collections going up in smoke.

The written word is each generation's lasting legacy to the next and it would be a sin and a shame to render such rich treasures into trash. Keep the fires burning in your heart instead of on the book shelves: