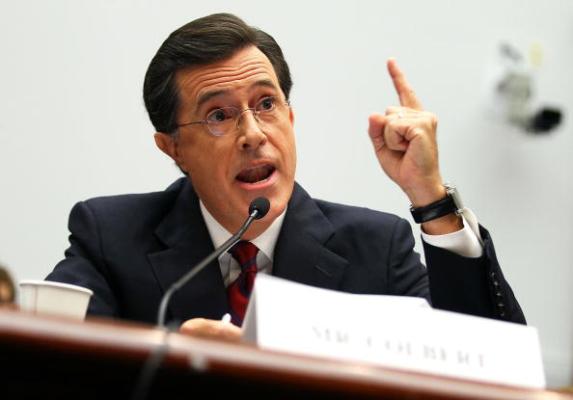 Pop culture and politics had a bit of a Reese's Peanut Butter Cup moment recently,as Stephen Colbert's testimony before a congressional committee caused quite a stir.

It was his typical brand of mock seriousness combined with his heartfelt opinion regarding the use of illegal immigrant labor in the farming industry.Granted,Colbert is not truly an expert in this field and the main purpose of having him speak before the committee was to use his star power as a ratings lightning rod for this issue but it does seem like the people behind this production had only good intentions in mind:

Comedy and politics are no strangers to each other,however most of the time these two warring factors tend to hook up on fictional playing fields. Goofiness often comes into play,especially for films aimed at the broadest targets such as the 1993 Goldie Hawn star vehicle,Protocol.

Goldie's character,Sunny Davis, sweet natured cocktail waitress was caught up in a political whirlwind as she was granted a diplomat's position after a bit of heroics at her former place of work saved the life of a foreign dignitary.

Things were resolved in apple pie order by the end of the film but not without Sunny putting her two cents in before Congress about where and who the ultimate responsibility for that whole mess belonged to:

One of the most popular "everyman in Washington" comedies of the past decade was Dave,that had Kevin Kline in duel roles as the elected President of the United States and his average American lookalike Dave Kovic,who had to take over the job for real due to the true President dying unexpectedly.

Part of the appeal of Dave was seeing how common sense solutions could be found to major problems such as hiring a regular tax man to help balance the budget. Just how realistic that approach would be is hard for me to tell but it is an amusing thought to have there:

Even lackluster movies like the sad sequel to Legally Blonde can't resist the regular guy/gal tact in handling big league politics. For most of LB2: Red,White and Blonde,Elle Woods is all about getting a bill passed that protects her little dog Bruiser.

When her big moment comes to present Bruiser's Bill to Congress,however,Elle recycles that bit from the first movie where her vast knowledge of hair care helped to save the day. That scene is certainly not in the same league as Mr. Smith Goes to Washington,folks,but some of what is said there is well meaning at best:

So,while you may not be pleased at our elected officials resorting to publicity stunts to get their point across,it's a good idea to simply not make matters worse by throwing more fuel onto the fire. Yes,it would be better and far more efficient to have those who truly know what they're talking about speak at such important venues,raising the roof about celebrity interference only diverts much needed attention away from other serious concerns.

Perhaps,comedy mixed with politics should stick to the realm of entertainment instead of turning real life proceedings into reality TV. Using a fictional format has proven to be a better way for getting your point made with your audience tuning in instead of out to your message:

Most people get their news from him anyway nowadays so might as well combine the two! I've never seen Protocol or Dave before but they both look like great movies. Oh you forgot Man of the Year!

Afraid I didn't see Man of the Year,but it does sound like it would fit the theme of regular folk getting involved in politics. I dig Colbert and Jon Stewart,they make a lot of big issues more down to earth and fun to discuss:)