My taste of the Top Chef Tour

For past few years,Top Chef has taken their act on the road by conducting cross country tours where fans can meet and greet many of their favorite TC contenders as well as get a chance to sample their culinary wares.

Yesterday,despite the occasional bouts of intense rain, I was able to make my way across a very damp parking lot along aside a good friend to attend one of the first stops in New York on this year's Top Chef Tour. The mood inside the tented area was cheerful,as folks flocked in to check out the cooking showdown that was about to begin. 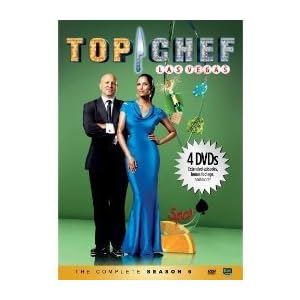 Each TC Tour event gives two former competitors a mini version of a Quickfire challenge,as they must make a dish using the same protein(chosen by Facebook fans in each city) and set of ingredients,with each allowed to add one special component of their own.

They have fifteen minutes to cook and are judged by selected members plucked from the audience. Our first chef was Ash Fulk,from Season Six which was Top Chef:Las Vegas. As we entered the tent,Ash could be seen at his prep station,hard at work on his mise en place, a sure promise of good things to come from him: 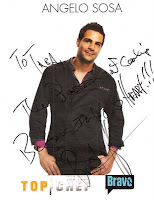 Facing off on Ash that day was Angelo Sosa,of Top Chef Season Seven and fresh off of Top Chef All-Stars. This is Angelo's first time on the tour and we were his first stop. Hopefully,the warm welcome he received from all assembled will keep growing as he goes onward.

The dish that Angelo and Ash had to make was a skirt steak,with mushrooms,cabbage and other sundry items. Not only did the fellas have to cook fast,they also had to take questions from the audience and the judges on stage as well.

Being one of those judges myself(thanks to answering a trivia question from the moderator),I can tell you that it was pretty exciting to be that up close to watching how each chef would put their dish together.

As is his preferred choice of cuisine,Angelo took an Asian approach to the dish,making a Korean B-B-Q style of plate with kimchee and pickled mushrooms(as a shout-out to a well known tiff between two of his S7 competitors,he had some pea puree on the side). Angelo had a more casual yet charming attitude towards his cooking,a smart and savory tact indeed: 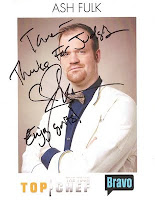 Ash went with a southern approach,making grits for his steak and his choice of special ingredient was anchovies which he made into a sauce for the meat. Trust me when I say that you wouldn't know there was any fishy element to the dish if no one had told you beforehand(I mean that in a good way,I swear!).

After we on stage had tasted the finished food,along with those in the audience who were served similar plates from the sous chefs on board the tour bus,our decision was unanimous. While Angelo's spicy steak had a wonderful blend of heat and sweet,Ash's delectable down home take was the hands down winner.

As one of the other judges put it,Angelo's dish was something you'd have and enjoy at least once but Ash's would be the one to have over and over again.This was the first time that I ever had kimchee or grits and if you're going to be introduced to new taste sensations,having a Top Chef do so for you is a culinary opportunity worth taking.

I just hope that my critiques of the food sounded sensible. The mike was passed to me at one point on stage and my hair nearly did change colors when I mentioned how "pleasurable" it was to go from Angelo's plate to Ash's. Granted,I'm not an food expert or master in the field like Jacques Pepin or someone like that but my impressions of the food were just as truly meant as any of theirs would be:

As of this writing,the Top Chef Tour will be completing Day Two of their time in my hometown and will be moving on to the other eleven cities in their itinerary. If one of them happens to be near you,do take the time to see it.

The events are free,with autograph signings from the chefs afterward and other foodie related games(we had a guess the aroma test which sadly I flunked but did get a nifty Top Chef bag clip for my trouble).

One of the tricky things about being a fan of cooking competition TV shows is that you're never able to get a real idea of what the food is like for yourself. With the Top Chef Tour,people can expand their flavor profiles as well as get the true flavor of the folks who make it all happen. That extra touch truly does mean so much: