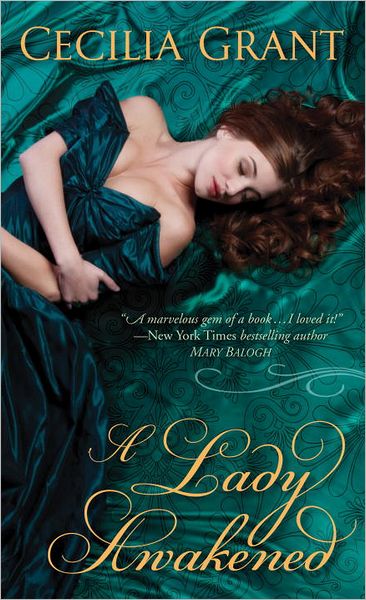 The premise of Cecilia Grant's debut novel,A Lady Awakened,might at first appear to be the set-up of a rather bawdy romp. Newly widowed Martha Russell is caught within the legalities of Regency England and in order to inherit the estate of her late husband,she must produce an heir before the end of her first month of mourning.

To that end,she offers a reluctantly transplanted new neighbor of hers,Theo Mirkwood,an indecent proposal;get her with child before time is up and he'll receive enough money to take his pleasures elsewhere.

Since Theo has been sent packing to one of his father's distant holdings due to the thoughtless ways in which he spends time and money(as well as the pursuit of amorous women),this seems like an offer too good to refuse.

However,there is more than meets the eye in this story when it comes to Martha and Theo than just bedroom hijinks(although those do occur but we'll get to that in a minute) and the thrills of this grand pursuit are truly those of an emotional roller-coaster nature:

Martha's motivations for retaining the estate are not those of a fortune hunter. She started a campaign to improve the lives of the tenant farmers on the estate,which includes a school for their children,particularly the girls.

In addition to that,her late husband's brother has a reputation for taking sexual advantage of the household maids,which many of the current staff remember all too well. That alone gives Martha plenty of reason to carry out this risky scheme but she also has little fondness for intimacy on any level and would rather save her passions for charitable endeavors.

She is bound and determined to keep this arrangement between her and Theo on a practical plain,which becomes hard to do as they get to know each other better. Martha,in a way,reminds me of such classic heroines as Jane Eyre or Sense and Sensibility's Elinor Dashwood,women who choose decorum and cool reasoning over their own heart's desire,regardless of whatever opportunities for their own happiness lie before them:

Theo Mirkwood,on the other hand,had no trouble accepting the unusual proposal that Martha made,being attracted to her right from the start. Not only interested in the money,Theo hoped to have a nice little lover's delight as well.

However,he soon found himself in a world of unexpected regret as Martha's clinical approach to their special arrangement were more effective than a cold shower to his physical and emotional needs.

He prided himself on being a truly frivolous person,bored by learning anything useful or knowing more than the highest price to pay for a snuffbox. Theo decided that the best way to engage the attentions and affections of Martha was to take an interest in the laborers on his family's property and much to his own surprise,found that he had a knack for making improvements as well as encouraging others to do so.

This talent for taking responsibility and finding innovative means of assistance that benefit the whole community helps to bring both Theo and Martha closer together,in every sense of that term. In a way,Theo reminds me of Henry Crawford from Mansfield Park,if he had a good twin or truly wanted to be a better person,that is: 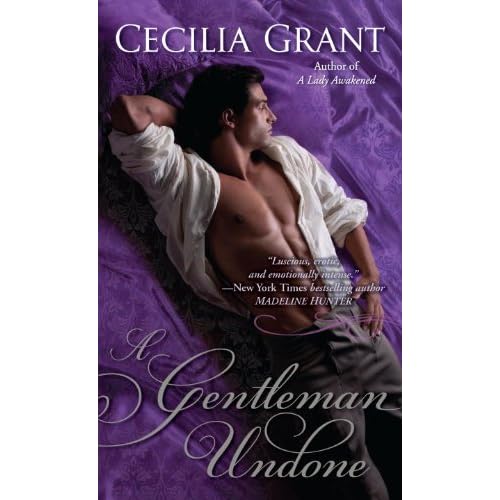 Author Cecilia Grant imbues her characters with realistic charm and grace,making both their inner turmoil and outward frustrations(sexual and otherwise)compelling components of the story.

The evolution of Martha and Theo's relationship is reflected through both their clandestine bed chamber meetings and their widening influence in the community. The two of them started out as isolated figures who let very few people into their personal sphere and not before long,find themselves the center of many other social circles. The positive growth of these romantic leads extends beyond themselves,which is something that doesn't happen to many major fictional folk and is enriching for the reader to explore.

I was fortunate enough to receive an advance copy of this book from Library Thing and I hope that many of you out there who got gift cards in your stocking this season use them to grab an edition for yourself. A Lady Awakened is on sale as we speak and will be followed up by A Gentleman Undone in May of 2012. This Regency era romance is a lovely way to warm the upcoming winter nights and keep those home fires burning for the rest of the year: