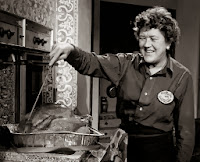 Continuing our Thanksgiving theme this month, we turn to the one place where this holiday is practically revered, the cooking show.

For foodie folk, this special day of feasting is like Christmas,New Year's and the Fourth of July all rolled into one. After all, the dinner is the center ring for this pop culture circus of culinary delights and many people rely on these programs for guidance and/or fresh new menu ideas.

To start things off properly, who better to tune into than Julia Child? While she was a French chef extraordinaire, the first lady of cooking didn't neglect this holiday ever, Whether it was on her own or teamed with friends like Jacques Pepin, Child always had plenty of advice to offer her fans and was even willing to approve of frozen turkeys(but she and Jacques would prefer that you take out the timer jammed into them):

While not a formerly trained chef, Rachael Ray has become as beloved as Julia Child in some respects(you can throw tomatoes at me for that but I stand by that statement!) and plenty of home cooks look to her for holiday help.

Even on her signature show,30 Minute Meals, Rachael offered up good savory suggestions on how to make a moist bird for your Thanksgiving table(granted,just the breast but that's the part I like best anyway):

Another major celebrity chef on this scene is Emeril Lagasse,who is currently doing guest judge duties on this New Orleans based season of Top Chef.

He's best known for his former Food Network show,Emeril Live where he "bammed" out some great meals and kicked it up a notch for Thanksgiving,not neglecting the sides dishes either. Hey, it can't all be turkey and gravy, you know:

Speaking of Food Network, they spend most of November on this tasty topic and round things off with their annual Thanksgiving Live(which is actually filmed well in advance of the actual day).

Alton Brown hosts this turkey telethon of on the spot advice,with cooking demos from the roster of FN hosts with a few flavorful surprises along the way. He also lent his special brand of entertaining instructions for the holiday on his former gig at Good Eats where brining is considering a step above basting: 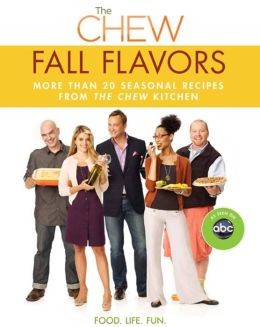 If you truly need daily help for your holiday planning, The Chew is all over this day like whipped cream on pumpkin pie.

With an array of edible expertise from Iron Chefs Mario Batali and Michael Symon,plus Carla Hall,a Top Chef alumna, tips for everything from table settings to desserts are in abundance.

The fun part of tuning into The Chew are the lively discussions which not only give you a variety of options but tell you a little something about each chef as well The individual demos are a big draw and often times have a side order of backseat cooking to go along with it:


Whether or not you look to TV for your menu suggestions, the most important thing about any cooking show at any time of year is to feel like you're hanging out with a great set of foodie friends. Even a very competitive series like Chopped can embrace the good feelings of the season and make your mealtime seem like a party(as well as be thankful for not having weird ingredients to work with), So, here's to the cooking show and all of the nose baths they make you long for:

I must say, you really did an exceptional job of making these programs look interesting. I write that as someone who loves to cook but only ever cared for watching the original Iron Chef series.

This year, we're not going to be cooking a big meal, but I think I will check out each of these videos and consider whether I should try one of the meals therein soon...