A Fearful February debut for Fanny Price,Slayer of Vampires!

I'm happy to announce that my latest ebook is preparing to make it's grand entrance next month,just in time for Valentine's Day.

Fanny Price,Slayer of Vampires tells a very different version of Mansfield Park(which is celebrating it's 200th publishing anniversary) as modern day descendants of the Bertram family discover a secret stash of letters that Fanny wrote to her sailor brother William but never dared to send him.

The three sets of letters describe how Fanny comes to realize that Mary and Henry Crawford have fangs even sharper than their wits,making their constant presence at Mansfield more frightening than daily visits from Aunt Norris.

Fanny has only surety of purpose and a specially sharpened keepsake from her recently departed Uncle Norris(who also leaves behind a couple of useful reference books as well) to protect the only home she knows and loves,not to mention her beloved Edmund. Can she save her loved ones from the clutches of the Crawfords or will she have even more difficulty in keeping Lady Bertram awake during tea time?

As you can see,my book is intended to be a mix of horror and comedy with a good dose of drama added into the mix. My theme is Jane Austen meets Buffy,which hopefully I do credit to both:

Some of the humor in the book comes from Willie E. Bertram,a good natured fellow who is one of the present day descendants of the former residents of Mansfield.

His sister Susan May finds out they have property still in England and travels there from the current family home in Florida to reclaim what's left of the place and perhaps turn it into a filming locale for future Downton Abby types of TV shows.

Willie,however, feels that the real money is in selling Fanny's story(which is found amongst the numerous items at the estate) to make some of that Twilight cash. He's more of a zombie fan but sees the potential in marketing to the Hot Topic crowd.

His biggest ambition is to get a movie deal and have his favorite actress Angelina Jolie star as the vampire Mary Crawford. I do agree that it's high time she play a bloodsucker,after all she certainly has the flair for scare,as her upcoming turn as bad fairy Maleficent promises to be: 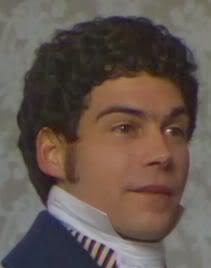 Speaking of the Crawfords,part of the reason that I wrote this story was to showcase this sinister pair of siblings as vampires.

They both possess the alluring looks and easy charm that is practically a trademark for vamps and I always found that part about how the Bertram girls considered Henry to be rather plain at first but all too soon found him rather attractive enough to fight over quite suspicious!

My favorite version of Henry Crawford is to be found in the 1983 BBC miniseries version(which also has the best of the horrid Aunt Norris  in Anna Massey as well) where he was played by Robert Burbage. However, I do not deny the appeal of the actors who have portrayed him in the other MP adaptations and rest assured Henry fans, he does have his moments to shine in FP:SOV to his best advantage:

Fanny Price,Slayer of Vampires is scheduled for sale on February 11 and pre-ordering should be available soon. I'm planning a special post on that day and hopefully,a special giveaway item will be ready by then,so stay tuned!

Samples of the book are available for reading at the official Smashwords page and further updates will be made available at my Facebook page,The Austenite Adventures.

I am profoundly grateful to my sister Stephanie for creating the cover art for this ebook(as she has so generously done for my previous ebook efforts) and look forward to hearing what my fellow Jane Austen admirers think of my attempt to give a gothic edge to Mansfield Park. I'd like to think that Jane would somewhat approve,as she did like a good gothy read every now and then:

I've never seen the season trailer for any season of Buffy, even though I think I've seen each one twice. That was pretty g-d cool. Thank you!